The FIA (Fédération Internationale de l’Automobile), is the international governing body of much of all motorsport racing, including the continually-popular Formula 1. As such, it is rare for this enormous organization to have something happen that it has never handled before.

However, as the FIA announced on the 21st, the organization will soon host the first FIA-sanctioned open-wheel race within New York City: the very first Formula E New York City ePrix, a double-header to take place on a 1.21-mile (1.947-km) track in Red Hook, Brooklyn.

The track is set with the skyline of Lower Manhattan and the Statue of Liberty in the background, and twists its way down around Pier 11 and the Brooklyn Cruise Terminal through 13 turns. 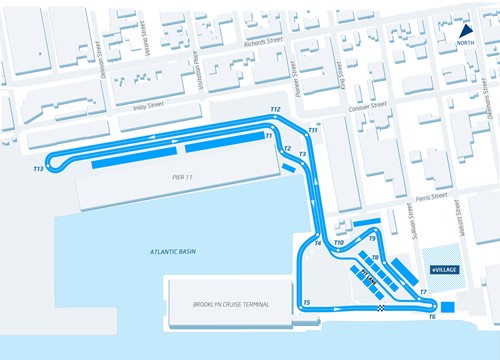 At the press conference revealing the track, Formula E CEO Alejandro Agag expressed how important this event is, saying “To race in New York City is a historic moment – not only for Formula E, but for motorsport in general – and again highlights the philosophy of Formula E to bring fully-electric racing to the world’s greatest cities. When we originally started the project we could only dream of bringing Formula E to a place like New York, with arguably the most recognizable skyline of any city in the world.”

Buemi probably summed up everyone’s feelings the best, though, saying, “New York is one of the world’s great cities. I think it will be an amazing event, particularly with that backdrop! I can’t wait to race there – I expect it’s going to be one of the most spectacular tracks we have been to so far.”