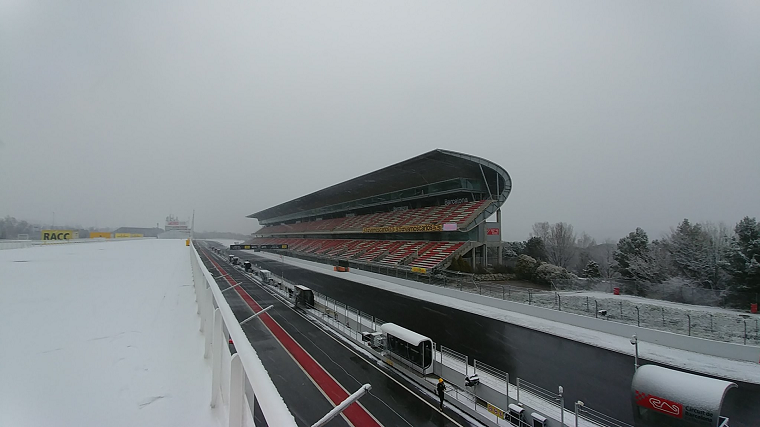 One of the reasons the teams test at the Barcelona circuit in Spain, instead of, say, the Sochi circuit in Russia, is that it greatly minimizes the chance of snowy and very cold weather—neither being ideal for testing—at a time when many circuits around the world are still deep in the throngs of winter.

…Greatly, but not entirely. It snowed overnight and in the morning at Barcelona, followed by heavy rain. As a result, the start of the session was delayed by three hours, yet this didn’t seem to have helped matters: despite having the whole day to test their new 2018 cars, only half of the Formula One teams even deigned to send a driver out, and of those that did get behind the wheel, none completed more than two laps, save for McLaren’s Fernando Alonso, who completed 11.

Red Bull’s Daniel Ricciardo went around the circuit once, headed back to the pits, went out again, had a little trip in the gravel and decided he was done for the day. Alonso’s 11 laps, which almost seem mighty compared to what everyone else accomplished, were done almost entirely in sets of one, and only on the full wet tires.

Maintenance Tip: Why you may want to service at a dealership

This robbed the team of valuable testing time, though the rare weather conditions fortunately fell during a year when none of the teams seem to be majorly struggling with reliability, as had been the case since 2014. In other words, they’re probably not too bothered.

The cars will hit the track again tomorrow and then another four times next week. The FIA had put forward a proposal for an extra testing day to the teams, which was not approved when only one of the teams voted “no.” Nobody is quite sure which team that was, but presumably they might be wishing to have done differently after having lost today’s entire session.

Vehicle Spotlight: Meet the Mirage, one of the most affordable cars on the road