Frank Lloyd Wright was one of the great Americans in history. As a renowned architect, he loved to erect buildings (although, as we’re finding out, buildings weren’t the only things he liked erecting). One of his greatest achievements was designing the iconic Soloman R. Guggenheim Museum in NYC, and over his career he designed numerous buildings and communities not just in the US, but across the world.

But buildings weren’t the only thing Wright designed. Towards the end of his life, Wright designed a car that boasted such features as six-foot wheels, a six-and-a-half-foot-tall passenger compartment, and excellent visibility. Oh, also, it looked like a penis. 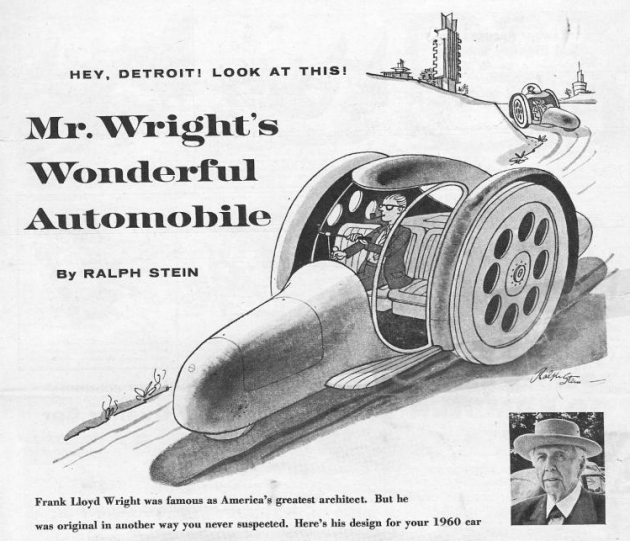 Unfortunately, Americans got to see just the tip of this unique idea, since it never made it to production. It seems that Mr. Wright really blew it with his attempt to penetrate the auto industry.

But although Wright might have thought this was a good idea for a car, ‘taint. The gigantic wheels would make the vehicle extremely heavy, especially when compared to the car’s light body, which would make for a bumpy ride and poor traction. The fact that there is a nine-foot gap between the front wheel and the two mid-vehicle wheels would spell trouble when driving over dips. Additionally, the car’s rear-wheel drive and awkward shape could mean a loss of steering at the crest of a particularly steep hill.

Still, despite its shortcomings, this is one of the most unique vehicles we’ve seen in a long time. If nothing else, it certainly is ballsy. As the original 1959 article from The Week Magazine exclaims, “Mr Wright’s design might not be as screwy as it sounds.”

Honestly, we feel shafted to have never seen this glorious car on our roads.