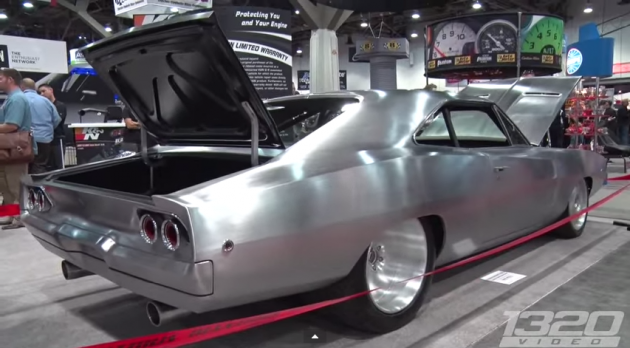 With Dom behind the wheel, the Maximus Charger is sure to drop draws with its performance
Picture: YouTube

Shiny things are always better than non-shiny things—especially when the shiny thing churns out 2,000 horsepower.

This is where the Maximus Charger comes in. Featured in the recently released Furious 7 film, the Maximus Charger is not just any old Dodge Charger—it’s possibly one of the most badass vehicles ever built. Created by the combined genius of Nelson Supercars and Scott Spock Racing, this one-of-a-kind powerhouse made jaws drop the moment it took the screen with Dominic Torreto behind the wheel.

Get a taste of the 2,000 horsepower in this video:

The combined team of engineers widened the body–based on a 1968 Charger model–by five inches, built a twin-turbo, all-aluminum 9.4-liter Hemi with twin injectors per cylinder, and gave it a bit of a buff job to make it shine.

According to Tom Nelson, owner of Nelson Supercars, it took a measly 4,000 hours to complete the Maximus. The entirety of the rear suspension is custom, while the front suspension is derived from a Corvette C6. Eighteen-inch-wide rear tires work with the body work thanks to those extra five inches in width, adding the flair that Dominic Torreto is known for.

If the appeal of such pure power and drivability wasn’t enough, the Maximus Charger also has creature comforts like air-conditioning and can be used out on the road.