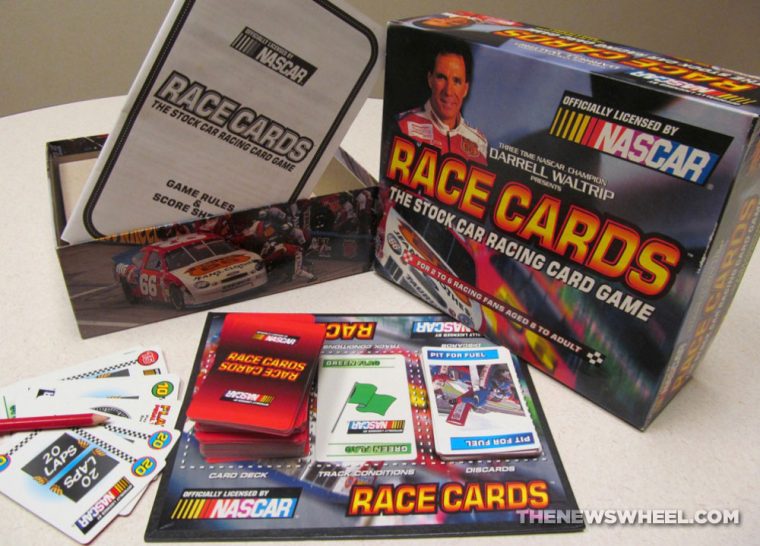 Throughout the years, NASCAR has had its share of game-based adaptations, from edge-of-your-seat simulation video games to multiple Monopoly editions. The recognizable branding, the thrill of racing, and the fan-driven frenzy surrounding stock car racing has led to many family gaming iterations of the sport. 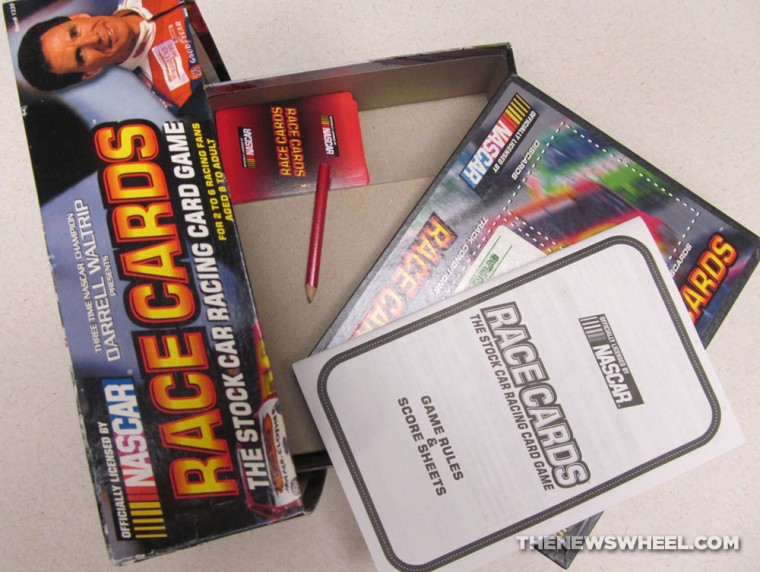 Want to Teach Your Kids about Cars? This picture book is full of amazing facts and illustrations!

You and competing players are all race car drivers in a NASCAR race. By drawing and playing cards, you will accumulate “laps” in order to be the first to reach 200. However, your opponents will attempt to sabotage you with blown tires and body damage–which can be remedied with pit stops. If you’re really bold, you can go flat out to accumulate laps faster, but can risk a blown engine card being played against you. Also keep an eye on the flag color, as this affects how fast you can travel. 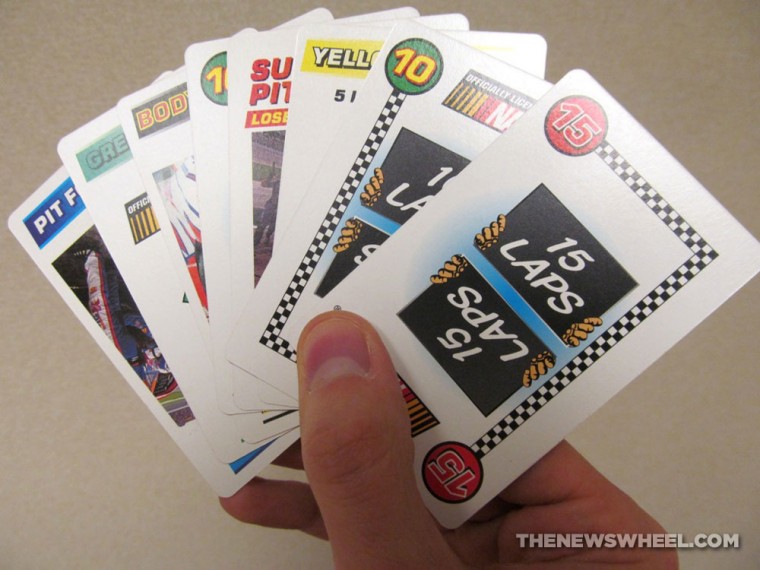 The most impressive aspect of Race Cards is its appearance. From its bold, dynamically designed box to its crisply-colored playing cards, this is an impressive-looking product. The cardboard container is solid and doesn’t warp even after years of use. The playing cards are thick, enduring being shuffled repeatedly without bending or peeling; they can even be read upside-down or right-side up. The components live up to the cost.

One drawback to the product is the size of the box. In order to accommodate the card layout board (a non-essential component) and the amount of branding on the outside, the box is a lot bigger than necessary to fit a single deck of cards. This leaves a ton of empty space in the box, with the cards unbalanced to one side, and difficult to carry around–something detrimental to the appeal of a simple card game. 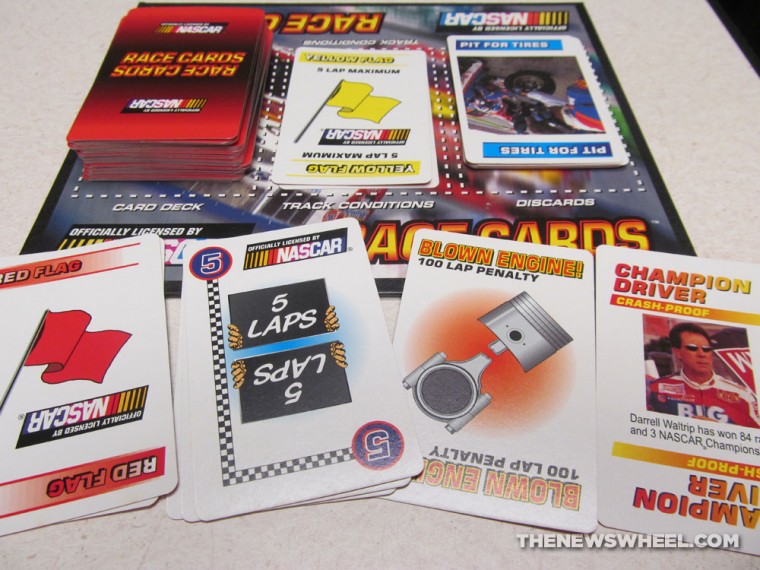 If you’re familiar with Mille Bornes, you practically already know Race Cards. Apart from the theme of the cards becoming laps, pit stops, and colored flags, the basic premise of the game remains fairly similar.

For those unfamiliar with Mille Bornes, Race Cards is still easy to pick up and will only take a couple minutes to learn. It sticks with the basic “draw a card, play a card” system on each player’s turn, resembling many other classic card games. The instructions are detailed, explaining every single card type, and provide many example scenarios. There’s even a good amount of cheesy humor in it.

The instruction manual includes score sheets that can be used to tally mile totals after every hand. However, as slowly as the game plays, tallying the score is unnecessary and confusing, only trying to “imitate” the appearance of a real car race. Perhaps if the game came with a dry-erase board that could be wiped and changed with each round, scoring this way could be fun. Otherwise, skip the score cards and count your cards on your own. 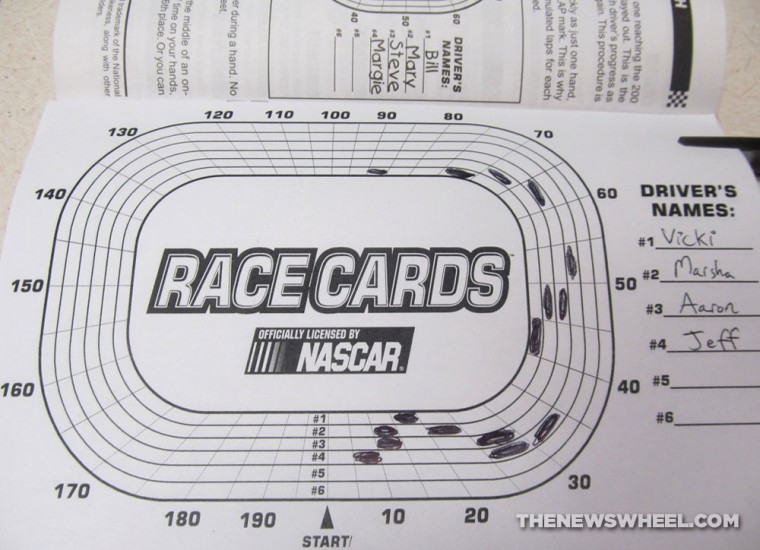 As thematically exciting as NASCAR racing is, and as classic a game as Mille Bornes is, Race Cards sounds like a great game. Sounds. Unfortunately, as well-constructed as a game can be, if it’s not fun to play, it’s still a disappointing experience.

Race Cards moves very slowly as players continually play yellow flags and hazard cards to slow the action. And if a red flag card is played, the game nearly halts as nothing can be done. There’s little strategy in drawing and playing the cards you have, so the game is mostly built on luck of the draw. It’s difficult to invest in a game which you have little control over, and continually ends in frustration as other plays keep hindering your progress.

If you like Mille Bornes and NASCAR, you might appreciate this game. However, it’s not an improvement on its French inspiration, so many fans will still probably prefer the classic over imitations. If you don’t like Mille Bornes (which I personally am not a big fan of), the game isn’t worth purchasing.

In the end, it’s simply not as thrilling as a game about racing cars should be.

Race Cards is out of print, but available used on online marketplaces like Ebay and Amazon.