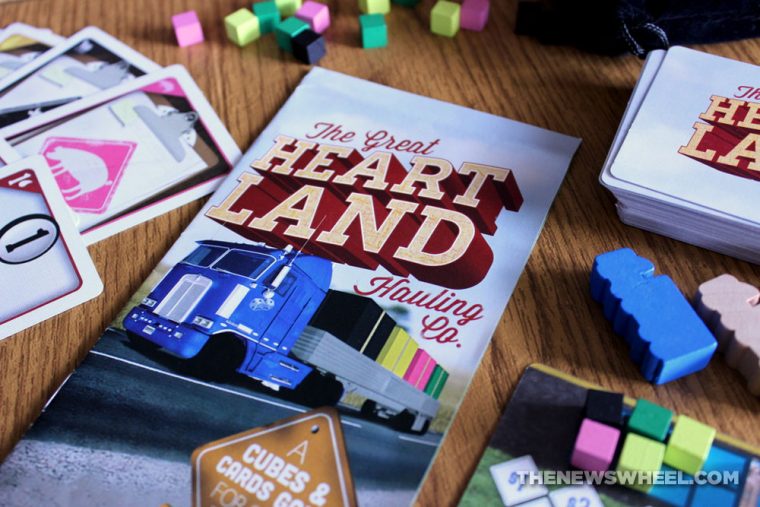 With so many unique niches in the world and the abundance of creative game designers, it’s not surprising that nearly every theme is being turned into a tabletop game these days. The business of cargo hauling via semi-truck probably isn’t a top interest for most gamers, but considering the success of similar transportation games like Ticket to Ride, maybe a trucking board game isn’t such an odd thought…

By underscoring the planning, logistical, and strategic aspects of medium-haul trucking, designer Jason Kotarski and Dice Hate Me have created a card-and-cube-moving game relying on pick-up and deliver mechanics. Originally a Kickstarter-funded game, The Great Heatland Hauling Co. is an easy-to-learn game with rich designs and a fully-developed thematic identity. 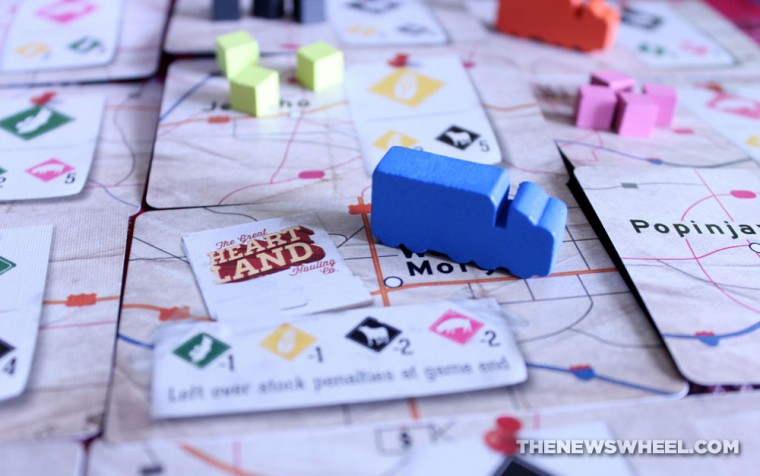 The object of The Great Heartland Hauling Co. (also known by its early name Over the Road) is to earn the most money by receiving, shipping, and delivering cargo. Pigs, cattle, soybeans, and corn are picked up in various towns across the Midwest and delivered to other towns willing to pay for those goods. As experienced truck drivers, players must use their resource cards to move the right items to the optimal locations using the fuel they have.

Cards are drawn and played each turn; each player must strategize around the cards they draw. The game isn’t directly competitive, as participants aren’t pitted against each other–only indirectly affecting the available cargo on the board.

The “board” is built using double-sided cards that change the map and layout every game. Cargo is represented by colored square blocks and players’ trucks are actual “truck meeples.” 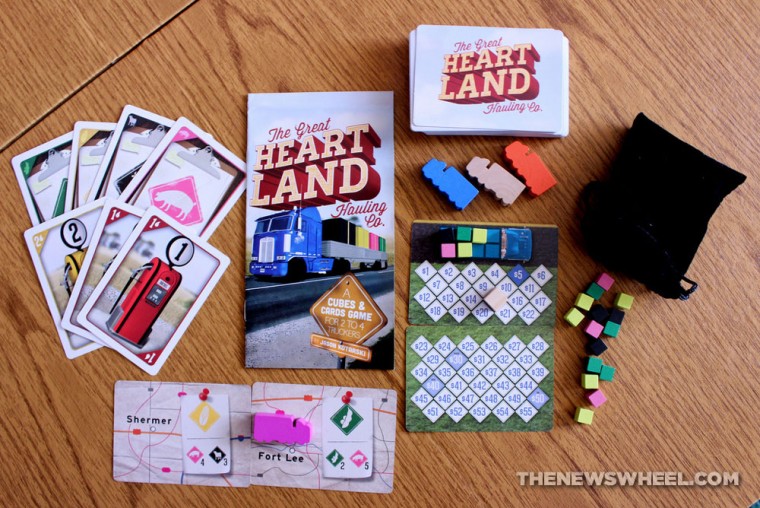 The game includes an “inspansion” to add a dozen purchasable upgrades like special trades, moves, and values to customize your strategy. A Badlands expansion is available as a separate purchase with a fifth truck (purple) and more map cards to extend the playing board.

The quality of the components is impressive. The cards are heavy stock paper, the wooden cubes are solid, the box is glossy, and the full-color directions use a lot of example diagrams. The box is small and portable, but unfortunately too compact to hold all the available add-ons for the game (especially if you have the expansion and all Kickstarter stretch goals).

This might not be a glamorous game idea in theory, but aesthetically it has a rustic Americana charm, as emphasized by the game’s name. Everything about the game is appealingly designed, from the truck pawns to the old gas station pumps and clip boards on the cards. 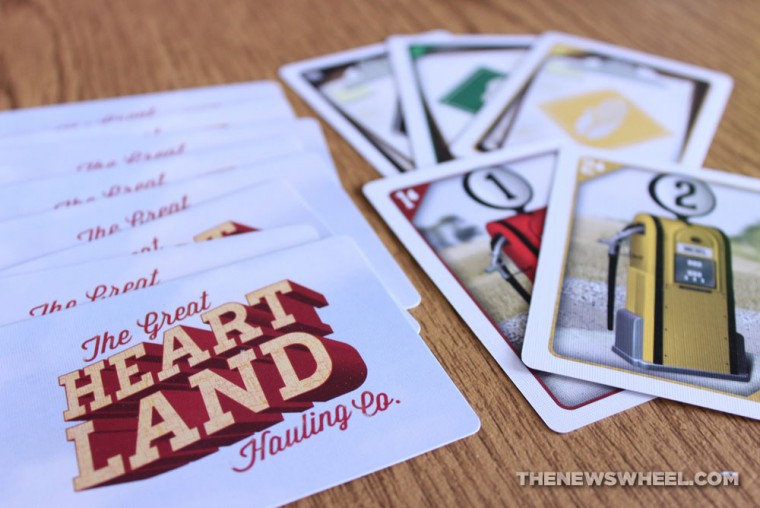 One of the best aspects of The Great Heatland Hauling Co. is its simple mechanics and thorough instructions. It’s easy to comprehend after a single read through the directions and can be taught to others in less than 10 minutes. Because of this ease, it makes a great game for families or people who like trucks but don’t normally like playing games. The cargo-moving theme is easy to grasp and can be picked up on after a few rounds of observation.

Because the game can run relatively short (our rounds only lasted 20 minutes when we played), playing multiple times is suggested. This gives players a chance to develop their strategies, try different techniques, and have multiple chances of winning. That opportunity to grow in subsequent rounds is crucial to enjoying the game, as first-time players will struggle to beat experienced players who already know what to do and look for within the game. 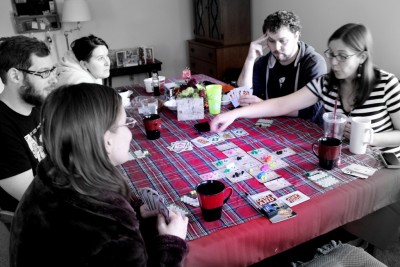 If you enjoy playing strategy games that are simple in concept yet offer great replay value, The Great Heartland Hauling Co. will undoubtedly appeal to you. Even if you don’t like its semi-truck theme, you’ll find it’s a solid challenge of weighing cost vs. benefit as you plan cost-efficient routes.

The game relies almost entirely on strategy, with hardly any random elements coming into play. You might not draw the cards you need, but the game forces you to make the most of your resources and find alternate ways to accomplish your goal. Most of the time, you’re already planning five steps ahead before it’s your turn.

There’s also an abundance of replay value in the double-sided map cards that establish varying board lay-outs every round. Road closures, toll roads, and weigh stations can be added to make maps more challenging. Even more variants are suggested in the instructions, and the “inspansion” cards can be added for purchasable upgrades.

The game does end much too fast if you’re playing with too many people, as the monetary goal of $30 can be achieved after a few short turns. The Great Heartland Hauling Co. is best played with two or three players with the goal being higher at $40 or $50. Otherwise, one person can win before the rest are able to implement a strategy.

For a thematic game that’s strategic without being overly attention-demanding, The Great Heartland Hauling Co. is a solid purchase. For the time of game it is, it’s perfectly balanced, scalable, and offers replay value. It’s even better when accompanied by a playlist of classic country songs.

The Great Heartland Hauling Co. is sold online at Amazon and the publisher’s website.