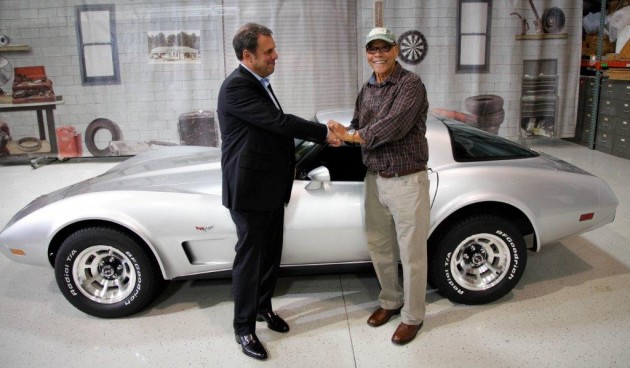 Last year, 71-year old Detroit native George Talley got the surprise of his life when AAA called to inform him that his stolen 1979 Chevy Corvette had been recovered in Hattiesburg, Mississippi. When General Motors executive Mark Reuss heard the story, he personally paid to have the classic car transported back to Talley so that the two could be reunited after over three decades apart.

But the story doesn’t end there. Reuss also spearheaded the restoration of the vehicle, which was completed by the GM Heritage Center, in conjunction with Autometric Body Shop in Center Line, Michigan.

Today GM released a video showing Talley being reunited with his restored Vette, ahead of its official reveal at the Woodward Dream Cruise.

“Well I think you’ve gotta give back,” Reuss says in the video. “[Talley] has been a customer of GM forever, he’s a veteran, and those things are what make this country great.”

Talley himself says, “It’s hard to describe [the feelings], but I’m happy.”

There will be many great classic Chevys at the Woodward Dream Cruise on Saturday, but very few will come with a story as heartwarming as this one.