Get a Second Baby Seat: Toyota Jan Is Pregnant Again 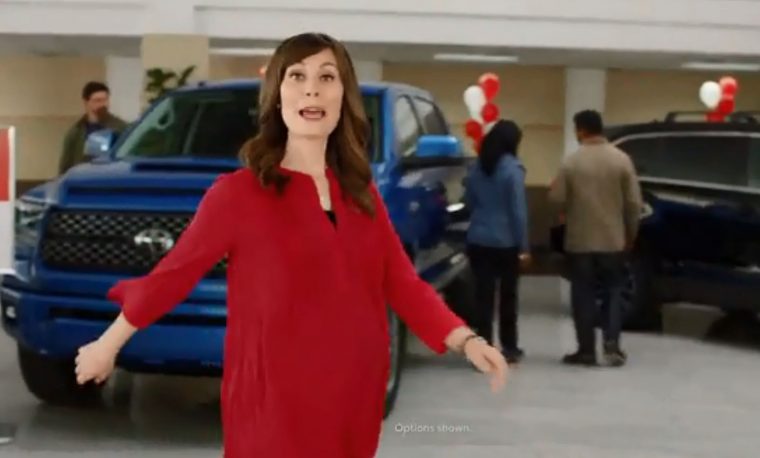 There are few automotive brand spokespeople we at The News Wheel love as much as Toyota Jan. Portrayed by actress and sketch comedian Laurel Coppock, the charming and sassy Jan — a receptionist at a busy Toyota dealership — goes out of her way to welcome potential customers and familiarize them with the newest Toyota models.

Back in May 2014, we uncovered that, as indicated by her baby bump and jokes about crazy food cravings, Toyota Jan was indeed pregnant in the commercials and in real life. Four years since cementing her place in Toyota’s fan community with her pregnancy, Jan’s recent TV appearances have led to speculation that she may be pregnant again. Could it be true? See Jan’s latest baby bump videos here!

I Want My Baby [Bump] Back: Toyota Confirms Jan’s Pregnancy 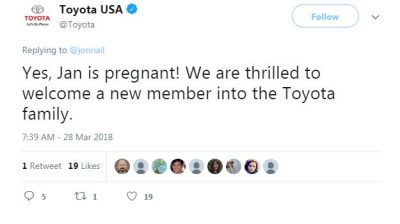 If you’ve seen any recent Toyota commercials, you may have noticed that Jan’s baby bump has returned. Though its presence is discreet, it led us (and many other Toyota fans) to wonder if Laurel is pregnant with her second child. After being asked multiple times, Toyota finally confirmed that yes indeed, Jan is pregnant again!

So far, in Toyota’s “Ready Set Go!” advertising campaign, Jan’s pregnancy has not yet been directly addressed or emphasized like her first one was four years ago. When Laurel Coppock was pregnant four years ago,  Toyota and its ad agency, Saatchi & Saatchi L.A., decided to write its new commercials to embrace the arrival of Jan Jr. (an official name was never disclosed).

In the years since welcoming the addition to the family, Laurel has shared her experiences as a mother in the YouTube channel The BreakWomb and returned to the Toyota showroom set for dozens of new commercials. Only recently has her character appeared wearing loose, flowing blouses again, and even purposefully holding items in front of her belly to hide it.

Toyota may have been trying to de-emphasize her current pregnancy until finally spilling the beans via Twitter in March, but now that the news it out, keep your eyes peeled for Jan to sport her stomach more noticeably.