Outrun the police in this fast-paced, strategic two-player board game 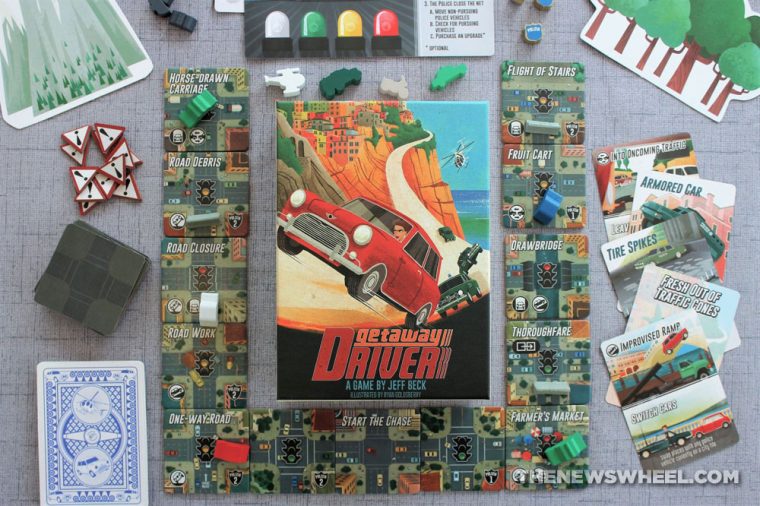 The vast majority of automotive-themed board games fall under one of two categories: Either they’re motorsports races or they simulate the economics of vehicle manufacturing. Even with the abundance of inventive games being produced in this golden age, rarely does a title tackle automobiles from any other angle.

Designer Jeff Beck must have seen this shameful shortage of variety too, because he had the brilliant idea to craft a game with a concept that hasn’t received its due treatment: a high-speed car chase.

As a gearhead and a gamer, I was thrilled by the fresh air that Getaway Driver breathes into an oft-neglected theme. It brings together my three passions (I’m also a movie buff) into one promising package.

Review of Getaway Driver:
Do you have the driving skills to evade the cops?

Famous 500 Review: This tight, tense 2-player motorsports game is small enough to fit in your pocket 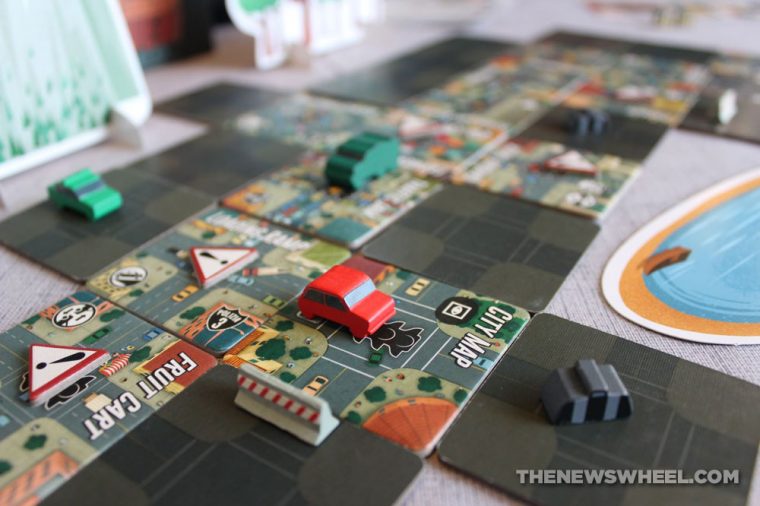 How to Play Getaway Driver

The first step in playing Getaway Driver is, obviously, to decide which person will be the criminal and which is the police. Each player has their own sets of cards, vehicles, and collection of tokens specific to their role.

At the beginning of the game, only the start tile is on the table, which the escaping driver starts on, with a couple stashes of loot scattered across the vicinity. The city map builds throughout the game as more tiles are added. 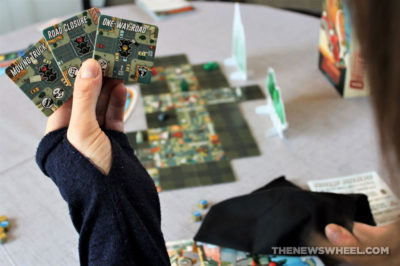 On each turn, the police add tiles face-down adjacent to the tile the driver is currently on, and the driver will flip over and move to one of the adjacent tiles. Depending on the traffic light color and icons on the activated tile, the driver could enter freely or sometimes have to perform tricky stunt maneuvers (discarding cards that match the icons) to avoid hazards on the tile.

Once the evading motorist moves, the police move similarly to attempt to catch and tail the driver. If the police are able to pursue the driver for four turns in a row, the driver is caught. But, if the scheming motorist is able to evade the police enough to exhaust the entire stock of tiles, they escape and win.

There are more intricacies and action/movement rules to the game, but that’s a general overview. 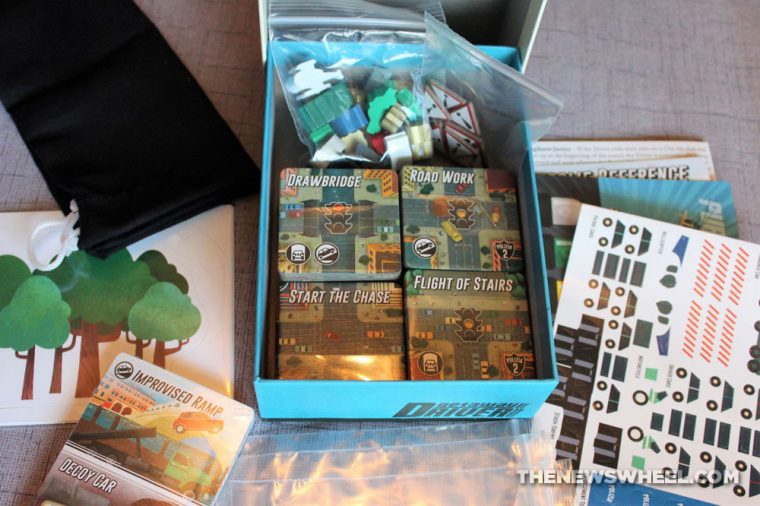 I was practically giddy opening up the box for Getaway Driver when it came in the mail. The contents were simply gorgeous, from the unique variety of vehicle meeples (the world needed an armored truck meeple) to the detailed city street artwork on the tiles to the bits of scenery to turn the play area into a diorama. I can’t stress enough how attractive, high-quality, and downright charming everything in this box is.

The only exception to that is the sheet of stickers. I tried applying them to the tokens, but they tore easily, weren’t cut along the image lines properly, and were often misshaped for their intended piece. But, the stickers are optional, so I don’t fault them much. 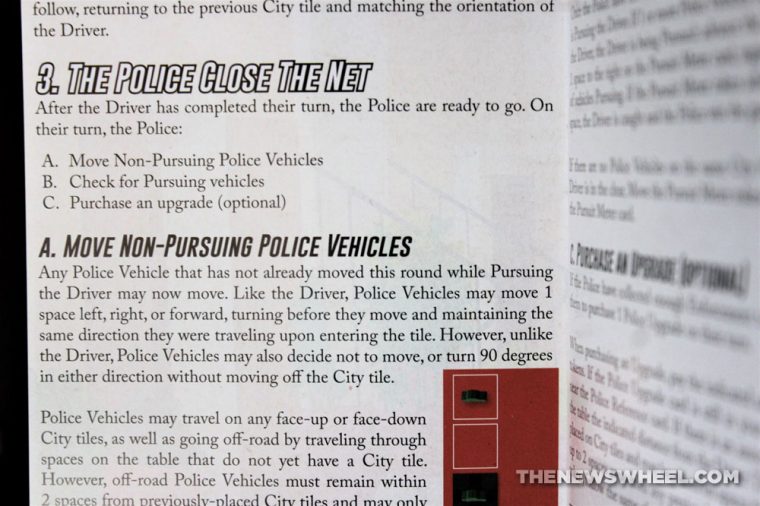 The instruction booklet for Getaway Driver is a tough, cumbersome read. I had trouble understanding some of the unclear phrasing and overlooked some crucial bits of information because they’re buried in unexpected sections. Some points are omitted from the booklet entirely because they’re assumed, not explicitly stated.

The publisher made a 17-minute official tutorial video on YouTube, which is a much better way to learn the game. After your initial viewing, you’ll understand the booklet much better.

Still, the rules video and booklet combined don’t clarify all scenarios. After your first game, you’ll have a list of questions and will be scouring the BoardGameGeek forums for answers. Thankfully, Jeff has been active answering questions. 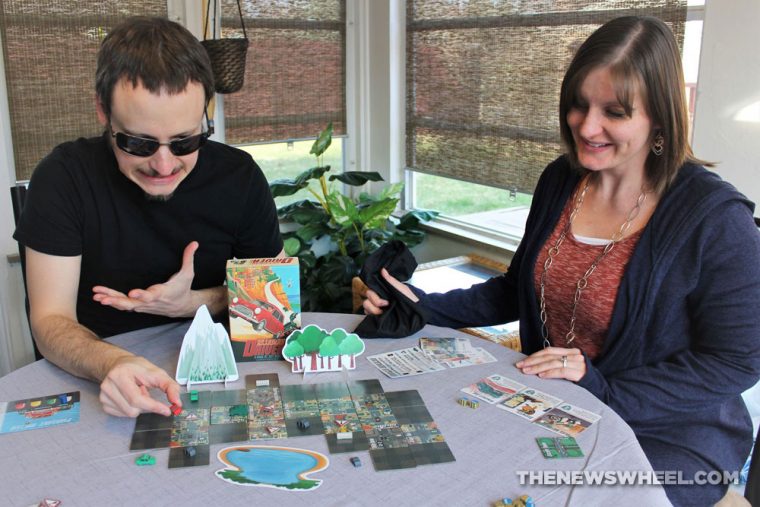 Truth be told, I’ve been waiting to play Getaway Driver since the day I backed it on Kickstarter in June 2018. The path to production has been a lot of fun to be part of, as Jeff clearly loves movie car chases and shared his favorites in every update.

Getaway Driver fulfills its mission as an addictive, tense game of cat-and-mouse between two players while paying homage to classic car chases from movies like The Italian Job and Bullitt. (the getaway car on the box cover clearly bears a MINI badge). Much like a film, the driver is clearly the protagonist and P.O.V. character of the game, revealing the city as they drive through it — while the police follow along off-screen and burst onto the scene to corner the driver at crucial moments. 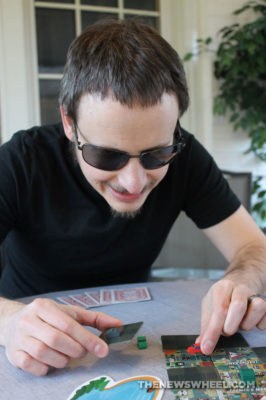 Each player must find their own strategy to win: the cop is gradually pushing the driver into a corner to catch them while the crook is planning their escape route multiple turns ahead. That involves direct, unapologetic conflict, as you feel frustration swelling inside seeing your opportunities diminish and your opponent gain the upper hand.

My wife and I own over 100 two-player games, and Getaway Driver is one of the most unique ones in our collection. It doesn’t feel like the same overdone, uninspired mechanics with an unrelated theme pasted on. Jeff truly crafted Getaway Driver from the ground (or road) up so that the car chase theme came through in every aspect of the gameplay.

Admittedly, you’ll have to play it a couple times to get a feel for how all the “gears” fit together, and you might not completely understand everything your first time through. Isn’t easy for the driver to win, and at times it will feel like the cops have too many resources in their arsenal, but a perfectly executed stunt maneuver feels so rewarding.

Car lovers will have a blast playing Getaway Driver. It captures the tension and ever-adjusting maneuvering of a Hollywood car chase in a way that you and your partner will enjoy playing again and again. I highly recommend getting yourself a copy.

You can purchase Getaway Driver on Fowers Games’ website.