Navigating the US: Getting Around in Minneapolis, Minnesota

As the largest city in the state of Minnesota, Minneapolis is oftentimes thought of as a surprisingly fun, attractive city, with approximately 390,000 residents calling it home. Though the city is landlocked in the middle of the states, it’s still surrounded by water with its location next to the Falls of St. Anthony, which is the largest source of water power on the Mississippi, and a “Chain of Lakes” within its borders.  These lakes in particular are what gave the city the name Minneapolis, which means “The City of Lakes,” making it a top choice for vacations all year around—even in the bitter winters.

There are two major interstates that run through Minneapolis. The first is I-35W, which runs mostly north and south, and I-94, which runs east and west. The I-494/694 beltway is also an important fixture, allowing you to traverse the metropolitan area with ease. Be aware of the lane you’re in though—freeway exchanges can sneak up on you quickly. 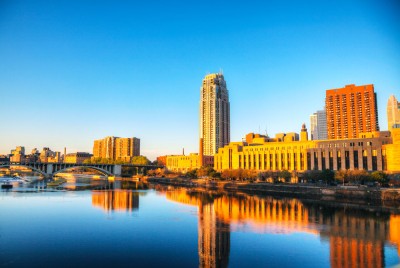 Minneapolis is Minnesota’s largest city, and is 47th largest in the US.

The major airport in the area is the Minneapolis-Saint Paul International Airport (MSP), which is dominated mostly by Delta Air Line flights, since it’s a major hub for the airline. There are two separate terminals—Terminal 1 and Terminal 2—so it’s important to know which one you’re flying into and out of. If you’re looking to get to the city for a cheap price, the Blue Line Light rail runs from the airport to downtown for anywhere from $1.75-$2.25 depending on the time of day.

Looking for more information on getting around in Minneapolis? Make sure you check out these websites: