Giugiaro Clipper: The Haunting of Geneva

The Clipper has gull-wing and butterfly doors, iPad Minis in the headrests, a 335 mile range, and more than enough crazy to go around.

In the opening line of her timeless novel, The Haunting of Hill House, Shirley Jackson famously wrote: “No live organism can continue for long to exist sanely under conditions of absolute reality.” She was referencing Hill House, which was by no means a living organism in the way human beings are, but was nonetheless in some strange sense alive and terrifying. If we were to apply that same logic to cars—that vehicles are in some ways live organisms that cannot exist sanely within the bounds of reality, then the Giugiaro Clipper is the stuff great campfire ghost stories are made of. 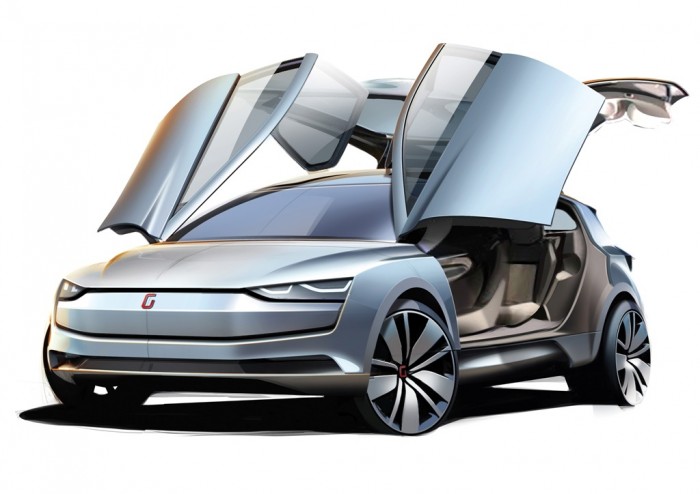 This thing is terrifying.

“No live organism can continue for long to exist sanely under conditions of absolute reality; even EVs and hatchbacks are supposed, by some, to dream. The Giugiaro Clipper, not sane, stood alone on its platform at the 2014 Geneva Motor Show, holding Alcantara leather upholstery within; it had stood so for one evening and would stand for thirteen more (the Geneva Motor Show ends March 16).

“Within, three rows of seats continued upright, unrestricted by pillar, iPad Minis in the headrests, displays floated, and gull-wing and butterfly doors senselessly and simultaneously open; silence lay steadily against the metal and aluminum of the Giugiaro Clipper (because it’s powered by two quiet 147 horsepower electric motors that provide a top speed of 127mph and a driving range of 335 miles), and whoever watched it there, watched it in awe.”

That happy family up there? They are running for their lives.

I want to know your take on the Giugiaro Clipper here: does this MPV hit the lottery jackpot, or should somebody take it out into a field and stone it to death?

That happy family up there? They are running for their lives.