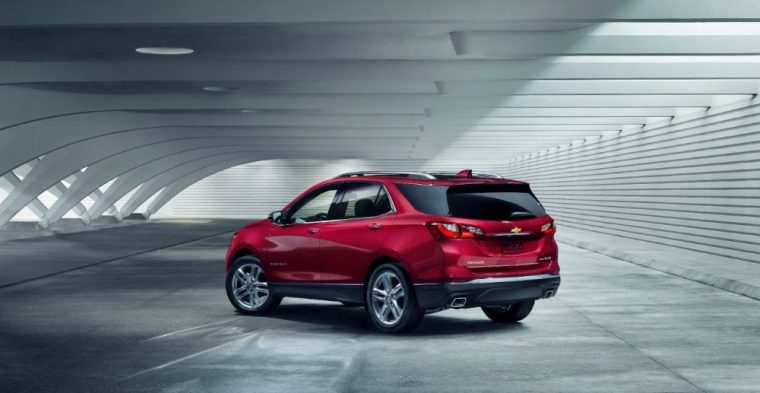 The 2018 Chevrolet Equinox will have a starting MSRP of less than $30,000 in Canada
Photo: © General Motors

The month of January has been a busy one for Chevrolet. Besides bringing its full model lineup to the Detroit Auto Show—including a life-sized LEGO Batmobile—the American automaker also showcased its 2018 Chevrolet Equinox at the Montreal International Auto Show.

This marked the debut of the next-generation Equinox in Canada, where it’s scheduled to go on sale this spring. The new Equinox will carry a starting MSRP of $26,995 in Canada, which also happens to be the country where it’s manufactured.

Changes made to the Equinox include a more aggressive appearance, highlighted by a bold grille design, smaller fog lights, and a shorter hood. In fact, the 2018 Equinox is more than four-inches shorter than the current Equinox in overall length. However, the ‘18 Equinox will still be longer than rival crossovers such as the Honda CR-V and Ford Escape.

The 2018 Equinox will also be offered with a new 1.6-liter diesel engine rated at 136 horsepower and 236 lb-ft of torque. This motor uses a Diesel Exhaust Fluid (DEF) System to treat its exhaust gases in order to improve emissions. Other engine options for the ‘18 Equinox include both 1.5-liter and 2.0-liter turbocharged four-cylinders. The later engine comes paired with a nine-speed automatic transmission, while the other two work with a six-speed automatic gearbox.

The 2018 Equinox becomes the fourth new Chevrolet released in Canada over the past 12 months. The other three are the redesigned Trax crossover, updated Traverse SUV, and all-new Bolt electric vehicle.

“The next-generation Equinox continues the transformation of the Chevrolet product portfolio and nowhere is that more important than right here in Quebec with retail sales up – 21 per cent per cent in 2016 and by the end of this year, 95 per cent of our lineup will be less than two years old,” said Steve Flamand, GM Canada regional director for sales, service and marketing.  “Additionally, our long-term commitment to electrification is delivering results with Volt retail sales up 133 per cent and our first Bolt EV customer deliveries taking place – later this month. Chevrolet continues to offer more green, plug-in EV choices to Quebecers than any other manufacturer.”