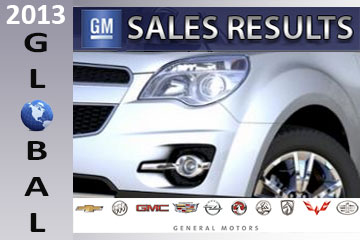 General Motors was no doubt proud to announce last week that cumulative global sales for 2013 totaled 9,714,652; this figure was good enough for a 4 percent increase over GM global sales in 2012, asserting the automaker’s place as a dominant force in automotive the world over.

Two of GM’s top global markets, China and the UK, posted 11 percent year-over-year increases in 2013, which was the largest increase percentage-wise in among all of General Motors’ markets; GM also managed to set an all-time full-year sales record in the highly competitive China marketplace.  Sales in the United States were up 7 percent.

“A healthy auto market in the United States and China, and very successful product launches at all of our brands worldwide drove GM’s growth in 2013 and helped us navigate difficult conditions in Europe and parts of South America and Asia,” said Dan Ammann, GM executive vice president and chief financial officer, in a statement released by GM.

General Motors also announced that it will henceforth announce GM global sales on a quarterly basis in order to facilitate the spread of information regarding its global growth strategy.

Some of the highlights for GM global sales and the success of GM brands in 2013 include: