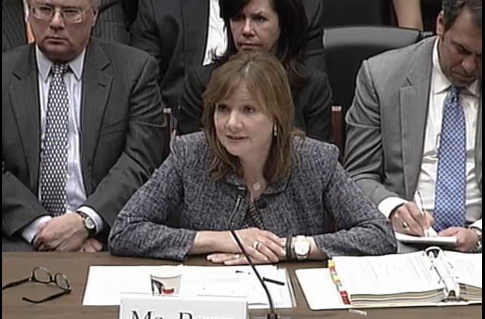 An email reveals that GM CEO Barra was informed of issues plaguing the Saturn Ion as far back as 2011.

This weekend’s GM recall roundup sees a number of documents coming to light and a number of signs pointing to the conclusion that GM and Delphi both knew that something was wrong with their ignition switches.

Of particular interest is the fact that current GM CEO Mary Barra had at least some rudimentary understanding of the problems plaguing the Saturn Ion as far back as October 2011, which contradicts her frequently-offered excuse of having only known about the issue  since January 31. A GM spokesman has since explained that the issue discussed in the aforementioned email was an issue unrelated to that which has led to the deaths of at least 12 people. The House has made public the actual email, wherein Terry Woychowsi tells Barra “[t]his situation has been evolving.”

On Friday, five US senators–Richard Blumenthal (D-Conn.), Barbara Boxer (D-Calif.), Bob Casey (D-Pa.), Mazie Hirono (D-Hawaii), and Edward J. Markey (D-Mass.)–determined that General Motors has conducted itself in a “fraudulent and reprehensible” manner, and subsequently contacted Attorney General Eric Holder, asking that the Department of Justice intervene in pending civil actions and establish a fund that would compensate the victims and their families. Thus far, Barra and GM’s company line has been that they will not make a determination about civil restitution for victims and families until the internal investigation has concluded.

Finally, GM has turned over some 200,000 pages of documents to investigators, and Jalopnik has provided us with the first 621 pages. There’s a lot to ingest here, but there is a substantial amount of information suggesting that GM and parts supplier Delphi knew that something was terribly wrong with the ignition switches.

Additionally, those who wish to watch the entirety of the House Oversight and Investigations Subcommittee’s hearing and Barra’s testimony, all four glorious hours of it are available online. You can watch the video below, and let me assure you, it’s a real riot.

Given the federal government’s role in helping General Motors out of bankruptcy, do you believe the Attorney General/DoJ would be justified in forcing GM to compensate victims?