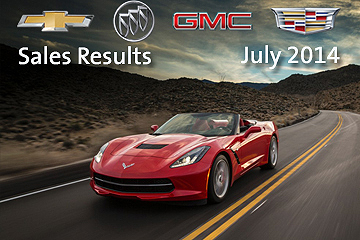 GM’s July sales report was released last Friday, demonstrating GM’s latest victory: the first automaker to exceed 1,000,000 sales of trucks and SUVs in the U.S. this year. GM also earned this distinction in 2013. Particularly, GM moved 1,048,114 trucks and SUVs by the end of July of this year.

“Sales of utility vehicles soared in July because American families feel better about the economy than they have in a long time, and they are finding an incredible variety of redesigned and all-new models in our showrooms,” commented Kurt McNeil, U.S. vice president of Sales Operations. “Small, compact, medium, large – sales were strong across the board.”

Mr. McNeil is right. In total, General Motors delivered 256,160 units, which marks the best July that the company has seen since back in 2007 and a 9 percent increase over July of 2013, with retails sales specifically up 4 percent, commercial sales up 69 percent, and other miscellaneous fleet sales up 21 percent.

“GM and the U.S. economy left July carrying good momentum,” McNeil added. “The economy has bounced back strongly from the harsh winter, consumer confidence has reached a post-recession high, energy prices remain moderate and job growth continues. The stage is set for strong sales through the balance of the year. In particular, there is a lot of pent-up demand for our new large SUVs and we expect pickup deliveries to be strong, as they usually are in the second half of the year.”

GM’s July sales are likely indicative of a continuing trend for the brand throughout the remainder of 2014, in terms of year-over-year sales figures.