Guess How Much Chevy Netted Off #TechnologyAndStuff

Think back to that painfully awkward moment when the World Series MVP Chevy rep, Rick Wilde (playfully named #ChevyGuy on social media), presented World Series MVP, Madison Bumgarner, with a 2015 Chevy Colorado, but was so nervous that he beautifully described said Colorado as a truck that “combines class-winning and leading, um, y’know, technology and stuff.” (Come to think of it, did Bumgarner ever locate his Colorado?) It turns out that, because of Wilde’s horrific speech for the Chevy brand and the ensuing #TechnologyAndStuff hashtag that will likely plague the rest of his career, Chevy ended up receiving about $5 million in free media exposure, according to Ad Age. FIVE MILLION FREAKING DOLLARS. 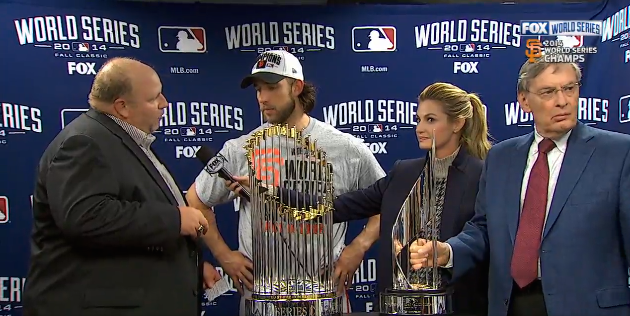 That’s because shortly after the awkward #TechnologyAndStuff fiasco on live TV, Chevy marketers began to pump out some good and funny content, poking fun at their own brand. And it worked.

“The guys made lemonade out of a lemon,” said Alan Batey, the global head of Chevrolet.

While the hashtag slowly died down over the next five days, we at The News Wheel still have a good chuckle about it whenever we think about the World Series. Who knows? Perhaps #TechnologyAndStuff will have a revival; maybe we’ll even see it in the informational brochures for the 2016 Chevrolet Colorado. That is, as long as Chevy continues to offer both technology and stuff on future models, which has not yet been confirmed.