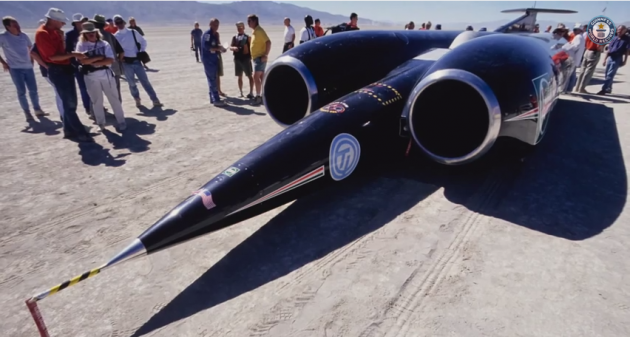 The ThrustSSC, which Andy Green drove to set the Guinness World Record for fastest land speed in 1997, hitting 763.035 mph

If you ever attended a slumber party during your youth, then you’ve probably spent at least one late night excitedly thumbing through a copy of a Guinness World Records book with your grade school friends. And while most of us grow up, enter adulthood, and eventually spend our late nights enjoying one of Guinness’ other fine products, it’s still always fun to marvel at the feats of athletic prowess, the extremes of the human body, and the really long fingernails that make up the rather diverse group of Guinness World Records.

Now, to celebrate the Guinness World Records 60th Anniversary, the organisation (that’s how they spell it over there) has released a series of videos on YouTube that commemorate some of the most notable records ever set. They’re all recommended viewing, but of particular interest to motorsports fans is the video below, which highlights the Guinness World Record for Fastest Land Speed, which now stands at 763.035 mph. Current record holder Andy Green, OBE (Officer of the Most Excellent Order of the British Empire), and former record holder (1983-1997) Richard Noble, OBE, are both interviewed in the 6-minute feature:

“The outright world land speed record is so iconic because it’s the simplest, purest, oldest form of motorsport,” Green explains in the video. “The easiest thing to understand, it is simply driving a car faster than anyone else in history.”

Hearing Green and Noble recount the history of the land speed record is fascinating in and of itself, but the really exciting news involves the work they are doing on the 1,000 mph Bloodhound SSC that they hope to roll out in July of next year.