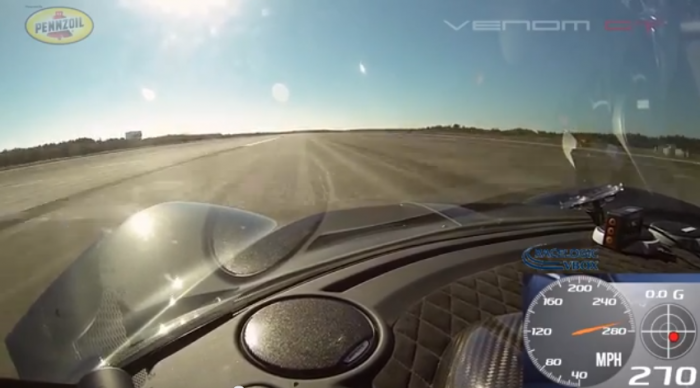 You are reading that right: the Hennessey Venom GT hit 270.49 miles per hour

The record for world’s fastest production car has been broken (unofficially, at least) after the Hennessey Venom GT topped out at 270.49mph during a run on the Space Shuttle runway at the Kennedy Space Center. According to Top Gear, a Valentine’s Day record attempt yielded a result that bested the 2010 record of 269.86mph set by the Bugatti Veyron SS. The record will remain unchanged until Hennessey’s serpent makes another more official run, but the message is clear: Bugatti’s best is being hunted by an advanced predator.

The Hennessey Venom GT, built by the eponymous performance shop based in Texas, boasts an absurd 7.0-liter twin-turbo GM-sourced V8 engine that generates 1,244 horsepower. The Venom went from 20mph to 120mph in 7.71 seconds and from 120mph to 220mph in just a bit less than 10 seconds. Wrap your head around that if you can.

Oh, and it bears noting that the Hennessey Venom also just looks fast? And did I mention so sexy? 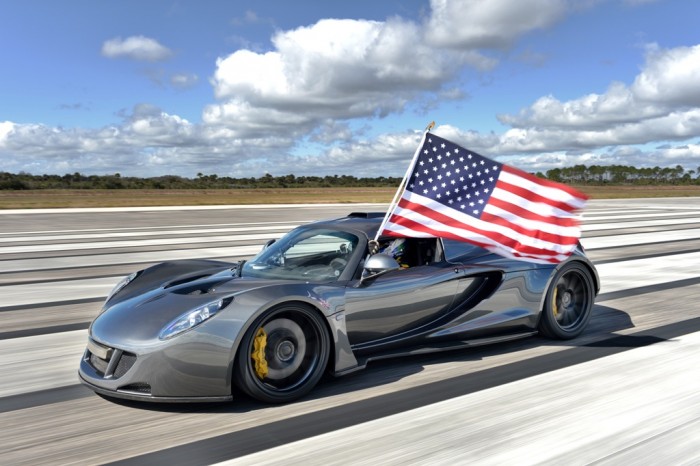 As Jalopnik reminds us, Hennessey and Bugatti have been battling for the title of world’s fastest production car since the latter was temporarily stripped of the standing after the former called some attention to the fact that production-model Veyrons are speed-limited to 258mph. The charge, which was ultimately reversed by GUINNESS, was that the Veyron that broke the record did not qualify as a production car because the limiter had been deactivated.

Of course, since there are always rules and regulations, the Venom GT’s record run doesn’t quite count according to Guinness because it wasn’t able to satisfy their qualification of making two runs in opposite directions (in order to account for wind resistance). However, Hennessey can’t be blamed for overlooking this requirement.

Oh, and also because rules, the Hennessey Venom GT also wouldn’t qualify for the Guinness World Record because it isn’t a production car, strictly speaking. Why? Well, the minimum requirement for a production car in Guinness’ eyes is 30 units; Hennessey is only manufacturing 29 Venom GTs. 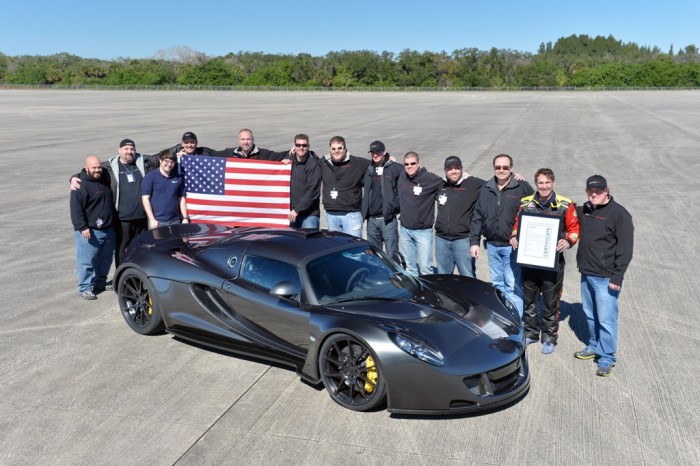 What this seems to indicate (to me, at least) is that Hennessey knows they have Bugatti’s number and that they just want to make them bleed—for now.

Think of Predator here: “If it bleeds, we can kill it.”

Hennessey’s Viper is a serpent coiled and patient in a thicket. You can hear its hiss, and you know it’s there, waiting for the right time to strike. 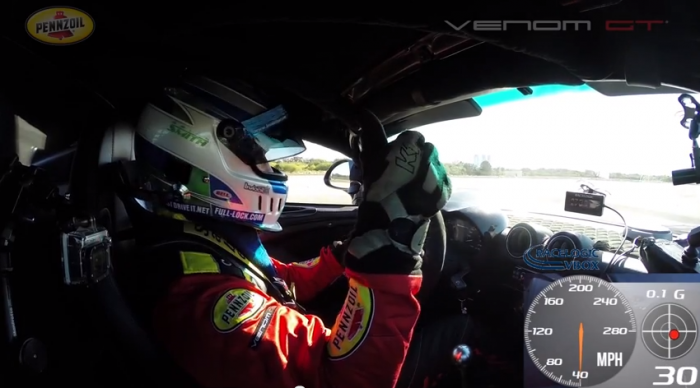 The video is led off with a quote from President John F. Kennedy from his famous 1962 speech given at Rice University.

“But why, some say, the moon? Why choose this as our goal? And they may well ask why climb the highest mountain? Why 35 years ago fly the Atlantic? Why does Rice play Texas? We choose to go to the Moon. We choose to the Moon in this decade and do the other things. Not because they are easy, but because they are hard. Because that goal will serve to organize and measure the best of our energies and skills. Because that challenge is one we are willing to accept, one we aren’t willing to postpone, and one we intend to win, and the others too.”

Cut to: the absurd speed of the Hennessey Venom GT, its loud and furious engine, and Miller Motorsport’s Brian Smith choosing to do the hard things and making them look easy.

“It was still pulling, Smith said. “If we could run on an 8-mile oval we could go faster than that. On the very top end there was a little wandering but, hey, we’re going 270 mph! The Venom GT didn’t require any big corrections, and the Michelins held traction really well.” 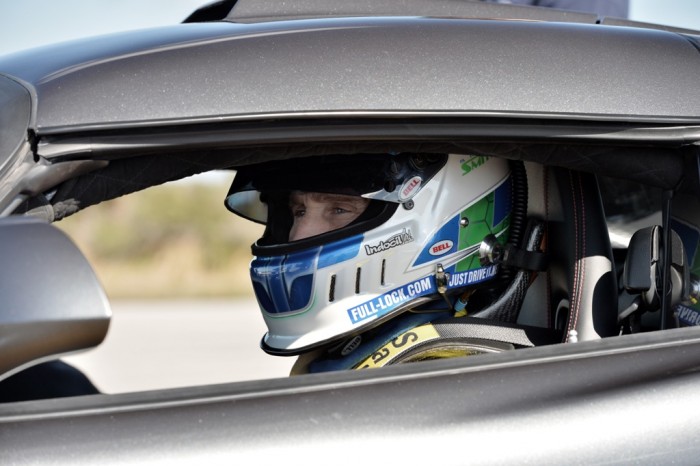 Only the brave dare.

According to Hennessey’s press release, a Racelogic rep was on hand to independently verify and confirm the Venom GT’s record-breaking 270.49mph performance. According to VBOX GPS data, the Venom GT took 10.1 seconds to climb from 260 to 270mph, and its acceleration was right around a mile a second.

“I knew the car had it in it, but it’s a thrill to officially validate the Venom GT’s 270-­‐ mph speed,” said Hennessey CEO Don Goldman. “Venturing anywhere above 200 mph—let alone 270 is not to be taken lightly, and we’re elated to have accomplished our goal.” 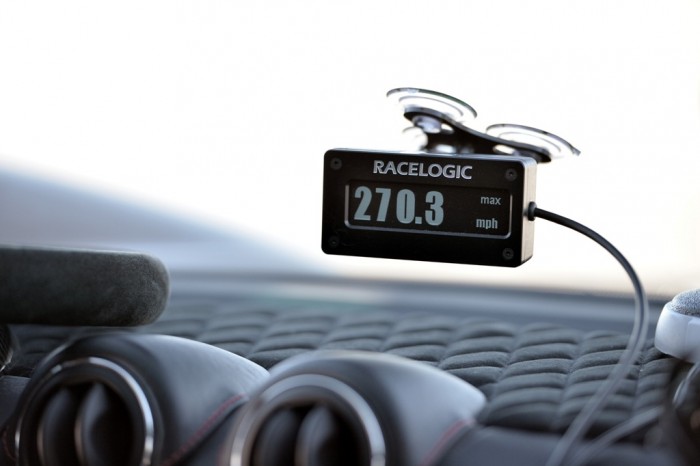 So why, if not for Guinness glory, did Hennessey choose to stake their claim as the world’s fastest at the Kennedy Space Center? Says John Hennessey: “I wanted to be an astronaut when I was a kid. Neil Armstrong was my childhood hero. Even though the astronaut thing didn’t work out for me, I am humbled to have had the opportunity to set our speed record on the hallowed grounds of the American space program.”

Your move, Bugatti. We’ll understand if you’re more than a little bit intimidated. 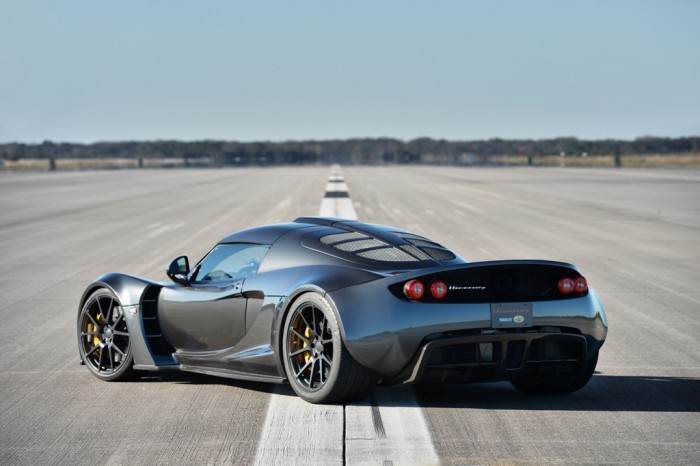