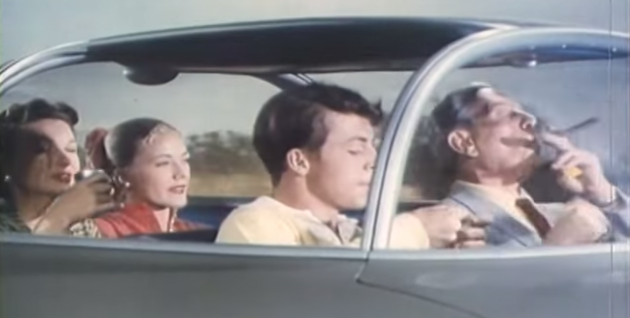 Because casual cigar smoking, like poodle skirts, will never go out of style!

In 1956, General Motors’ Motorama exhibit (a company show that traveled through the US) showcased a forward-thinking film that tried to imagine what the future of autonomous driving would look like in the far off world of… 1976.

The short film was produced and directed by Michael Kidd, the man who choreographed classic MGM musicals like The Band Wagon and Guys and Dolls, because apparently General Motors envisioned a 1976 in which families crooned requests to their “traffic controllers” like Bing Crosby.

Seriously, this thing is a musical.

In a pre-internet age, GM was left to assume that autonomous driving would work basically the same way that airplane travel does, with a traffic control tower that routes your path for you and communicates via radio (and song!). And while the car itself is remarkably advanced, the incredibly high-tech infrastructure of America’s roads is actually the real star of the show.

In GM’s 70s utopia, an electronic control strip in the “high-speed safety lane” guides cars that are set on auto pilot, enabling the driver and passengers to enjoy all of the amenities that the Firebird II has to offer—including a glove compartment full of orange juice and ice cream.

We really admire GM’s optimism—not only in regards to the technological advances they anticipated, but in regards to how damn easygoing everyone is in the year 1976. In the 1950s, they’re complaining about slow traffic, but just two decades later, they’re opting to take the scenic route to Chicago.

We don’t blame them. If we had self-driving cars equipped with orange juice, ice cream, and singing OnStar dudes, we’d be taking the scenic route, too.