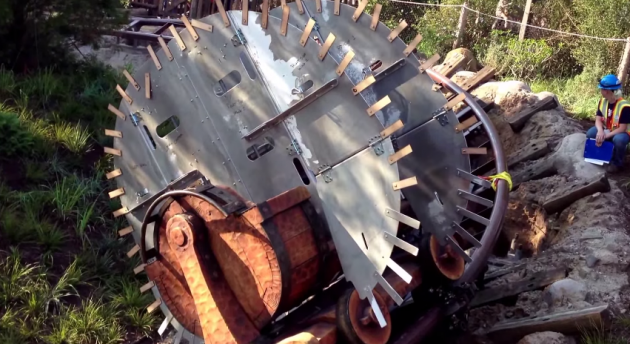 The “Envelope of Protection” used at Disneyland and Disney World

Disney recently banned selfie sticks from all of its parks in the US—not because the House of Mouse is taking a moral stand against obnoxious Millennials, but because of the genuine safety concerns raised by guests trying to use their sticks while on rides.

When the news was posted to the subreddit r/offbeat, it raised an interesting topic: When you’re riding on Expedition Everest, or Space Mountain, or Rock ‘n’ Roller Coaster, and you go speeding by an overhead beam that totally almost just took your hands off, guys(!!!!), what keeps your outstretched arms from actually getting cut off? What if you’d raised them a little higher, or been a little taller—after all, it seemed so close.

A reddit user by the name of EnglishMobster who claimed to be a cast member at Disneyland in California provided the answer, along with a video of the strange-looking device in question:

Looking for a Cooler Ride? Buying Versus Leasing a New Vehicle

We have a thing called the “Envelope of Protection.” Basically, all attractions made since 1965 are designed in such a way that the human body cannot reach out and touch anything — here’s a vehicle they use to test this (that’s from Walt Disney World in Florida, but California uses the same concepts). This means that when a rollercoaster is going 45 MPH, you can have your hands out and you won’t get hit (it’s not a good idea to test that, however — we do tell you to keep your hands and arms inside the vehicle at all times).

Fortunately, It’s a Small World opened in 1966, a full year after the “Envelope of Protection” had been adopted, which means the only anguish you’ll suffer on that ride will be the mental kind.

Looking for a Cooler Ride? Use the Car Payment Calculator