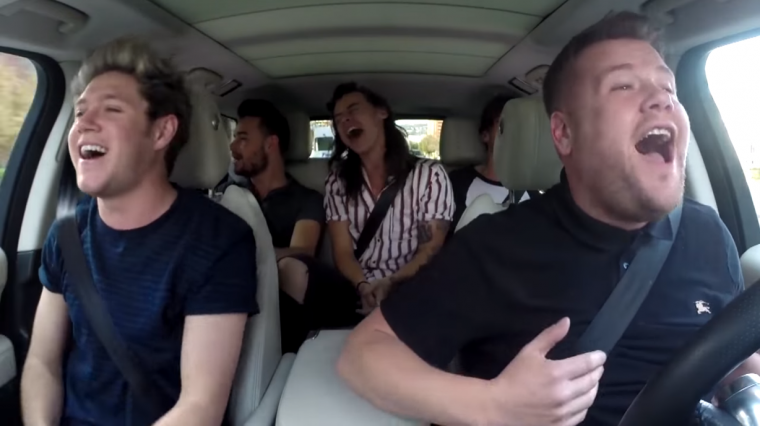 It’s no surprise that One Direction has the third most-viewed Carpool Karaoke episode in the segment’s history with well over 100 million views. During their reign on the charts, One Direction’s presence anywhere brought with it incredible hype from their “Directioners.”

But here’s the honest truth (sorry to burst your bubble, Directioners) – just because it’s One Direction doesn’t mean it’s the best.

Before you run down to the comments section and rant about how I can’t appreciate the majestic flow of Harry’s hair or Niall’s dreamy blue eyes, you should know this critique isn’t about their vocals. In fact, their vocals were quite good. It’s about the fact that while the singing may have been top-notch, that’s literally all they did.

Okay, okay, I get it – that’s what they do, they’re singers. But if you look at some of the best episodes of Carpool Karaoke, it’s about the conversations and the comedy. People come to Carpool Karaoke to hear a fun interview, including some occasional singing, with their favorite celebrities. If it were only about singing, Corden never would’ve had actors or other public figures like Michelle Obama on the segment. This episode had nothing but sing-a-long style One Direction songs. If I wanted to listen to 13 straight minutes of their songs live, I’d watch a concert video on YouTube.

I do have to admit, though, James Corden and Harry Styles took the trophies for the best notes of the ride. James Corden nailed the high note in “Best Song Ever,” shocking the entire group, especially his vocal counterpart, Harry Styles (his note to be discussed later on).

James Corden taps into his falsetto for “Best Song Ever”

About halfway through the episode, audiences received some false hope that they were going to get something more than just karaoke singing in a car. James Corden confronted the boys about their aversion to matching outfits and ’90s boy band choreography. Liam threw out a suggestion, “Why don’t you [Corden] choreograph it for us and we’ll do it.”

Soon after the idea bloomed, someone stomped on it like a weed in the fresh green lawn. James Corden proceeded to teach the boys their new dance routine… inside the car. So let me get this straight: James Corden and Selena Gomez can take a detour to ride a roller coaster and Usher and Corden can help innocent bystanders push their broken-down car to a mechanic, but One Direction can’t be bothered to get out of the car?

There were no especially funny jokes, either. That may have been at the fault of James Corden, considering he’s the comedian in the crew, but you’d think at least one of the four boys would have a joke to throw into the mix. The episode seemingly approached a potential laugh-fest with Niall playing a game of “Sleep With, Marry, Cruise,” but it seemed to fall flat.

Actually, I take it back. There was one funny joke. The boys mentioned the group was beginning a brief hiatus between albums. Two years and several solo careers later, I’m still laughing.

The episode ended with Harry’s turn to take the vocal trophy. During “Drag Me Down,” Harry belted out his famous note a few times. The first one was incredible, but the second one, he missed the mark. The entire car burst into laughter, including Harry (and me). But admit it, you did too.