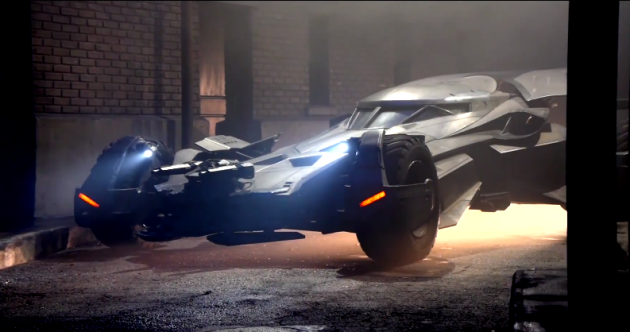 We’ve already seen (part of) the new Batmobile from Batman v Superman: Dawn of Justice, but today we got a better look at the beast, courtesy of Jo Blo Movie Trailers:

It appears to be an interesting portmanteau of two Batmobiles from days gone by. It has the same militarized armor shell as the Tumbler that Christian Bale drove in The Dark Knight trilogy, combined with the long body of the 90’s-era vehicle driven by such Batmen as Michael Keaton, Val Kilmer, and (ugh) George Clooney.

There is also a pair of very James Bondian machine guns mounted to the Batmobile’s hood. Hopefully they are capable of shooting kryptonite bullets.

If Zack Snyder really wanted to impress us, he could have gone retro by using the classic ’56 Oldsmobile Batmobile. But, of course, we live in the age of the gritty reboot, and if Ben Affleck is going to bark “Do you bleed?” while wearing a  weathered suit of armor in a thunderstorm, he’s apparently going to need to have a suitably grimy set of wheels.

But can’t Batman own at least one thing that’s fun and shiny and aesthetically pleasing? Does it all have to be so doom-and-gloom all of the time? And how come Batman doesn’t dance anymore? Remember the Batusi…