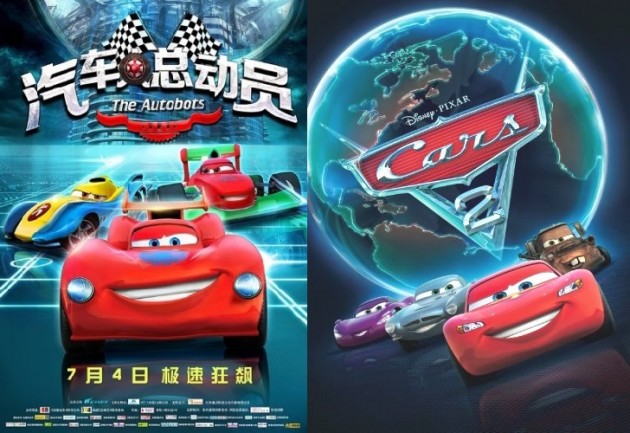 Disney might not be the most original production company out there, but at least it attempts to hide its mimicry. You know, like turning Michael J. Fox’s Doc Hollywood into a story about a red racecar who finds himself after getting lost in an amiable Podunk town–instead of a young hotshot surgeon. Nothing at all like the original.

Well, now the Disney/Pixar’s Cars is the one being ripped off.

Movie theaters in China screened a new, “all-original” animated feature film over the July 4th weekend. Based on the posters alone, strong comparisons are being made between this Chinese imitator and the record-breaking Cars films from Walt Disney Pictures.

Do you see any similarities between the advertisements above?

Vehicle Information: What is Hyundai BlueLink?

Did you happen to notice any resemblance between K1 (the car in the left poster) and Lightning McQueen (on the right)? Obviously you did, because they’re practically identical. Or perhaps Cinderella’s castle in this other poster for The Autobots?

This Chinese animated film which so blatantly copied the character and poster designs of Disney/Pixar’s Cars is known by its official English title, The Autobots–and yes, it’s title clearly borrows from ,a href=”https://thenewswheel.com/what-do-the-transformers-transform-into/”>Hasbro’s Transformers.

The Chinese population isn’t blind to this apparent plagiarism, and they’re not fans of it either. Thousands of Chinese citizens have condemned Jianrong personally on social media, accusing him of being a shameless copycat. The box office reflected that, as viewership averaged four people per screening during opening week.

Zhuo Jianrong, the filmmaker and CEO of the BlueMTV which produced the film, responded to many of the criticisms. He defended his work and called several journalists and fellow filmmakers “losers” and “traitors” who have “brain damage.” His defense is that (1) he knows about Cars but has never actually watched it, (2) the plot to The Autobots involves human characters, and (3) it intends to teach children moral lessons.

Granted, the plot does seem to be quite different. The Autobots involves an engineer who creates sentient cars that discover it isn’t humans that drive them–it’s friendship. *Facepalm*

While personifying cars, giving them faces and voices to talk, isn’t anything new, Disney has some ground to call foul. As a Disney spokesperson stated, “We believe ‘The Autobots’ picture blatantly infringes on Disney’s intellectual property rights from our Cars and Cars 2 movies and intend vigorously to protect our copyright.”

At least Disney can rest assured that the animation quality of The Autobots looks like a series of cut-scenes from a two-decade-old Playstation game.

Useful Resource: Calculate your car loan payments with this program