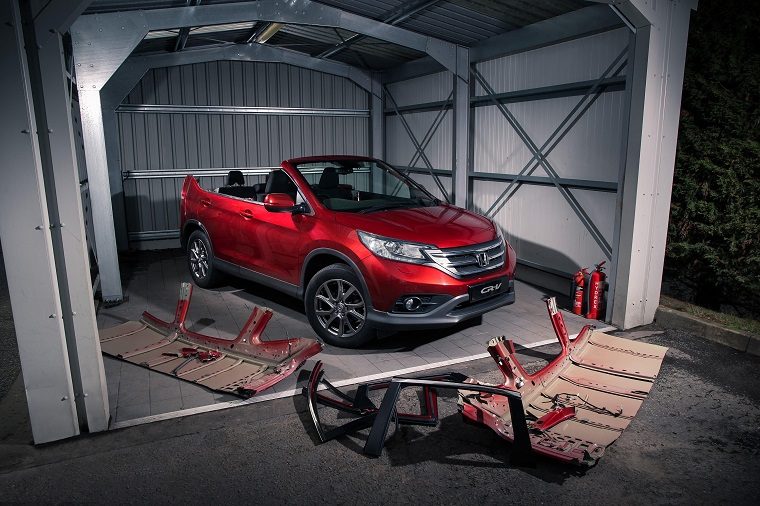 Honda has shown off a roadster version of its best-selling CR-V crossover that it says will go on sale in the United Kingdom at the start of next month. Though it should be obvious this is an April Fool’s joke, the automaker nonetheless made sure to remind us that it was, and we must admit we’re glad; after all, in a world where cars like the Range Rover Evoque convertible and the Nissan Murano CrossCabriolet exist, we wouldn’t quite be sure what to believe—and we’re probably better off without more of those monstrosities hitting the road.

Honda obviously think that making an actual CR-V Roadster would be a waste of time and is likely poking fun at the aforementioned vehicles. “This innovative design makes it a vehicle purely for sunnier climate and therefore completely useless for the two-day British summer,” it wrote, before adding that instead of implementing a complicated folding roof (such as the one used by the Evoque), it simply took the easy route of chopping off the metal roof with “the PR team and an angle grinder.”

Related: How does the actual CR-V compare to the competition?

Thanks to this conversion, “the designers…estimate the structural rigidity of the car has been reduced overall by approximately 100%, currently rendering it completely undriveable.”

“This is a bold new direction for the CR-V, and opens up an entirely new non-existent market,” said the so-called Future Opportunity Occupational Lead named Eipurirufūru, which means “April Fool” in Japanese. “Our sales target is somewhat conservative to start with, at zero cars, but we are confident that once the minor glitches are ironed out, such as the lack of roof and the fact it is totally structurally unsound, the car will fly out of showrooms.”

One gets the sense that Honda is having a bit of a laugh at the expense of other makers who are actually taking this kind of design seriously. In addition to the Evoque and the Murano CrossCabriolet, a new T-Roc Cabriolet by Volkswagen is slated for launch in 2020. Clearly, we know what Honda thinks about all of that.