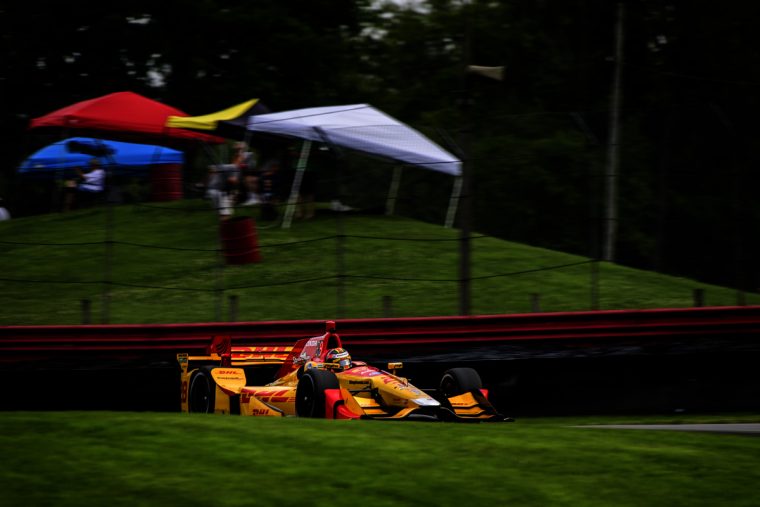 On Friday, Honda drivers Ryan Hunter-Reay and Scott Dixon led the way in the Verizon IndyCar Series practice for Sunday’s Honda Indy 200 at the Mid-Ohio Sports Car Course. Hunter-Reay and Dixon finished the day first and third on the time charts, respectively, after a pair of 45-minute sessions.

Andretti Autosport’s Hunter-Reay, a previous Mid-Ohio pole winner, paced the second, slightly faster practice session on a day that saw no fewer than eight drivers all run within a half-second of his 1:04.2961 benchmark. Meanwhile, Dixon, whose five career wins there have made him the unofficial “Master of Mid-Ohio,” posted the third-fastest time with his Chip Ganassi Racing Honda.

“Today was a good run,” Hunter-Reay said. “The DHL car was good; we just need to continue to make improvements from session to session. We didn’t test here, so it was nice to see we had a good pace from last year. We could just roll out and improve from there.

“We have a lot of work to do tomorrow; we know everyone else is going to be improving. It’s amazing, if you look at the times and see how close everything is, there is no margin for error. It’s going to be that way all weekend, so we’re just happy to have a productive day and looking forward to another one of those tomorrow.”

Rounding out the top fire for Honda was Alexander Rossi, with teammate Marco Andretti seventh in his Andretti Autosport Honda. The 2015 winner Graham Rahal ended the day in eighth with James Hinchcliffe behind him in tenth, making him the sixth Honda in the top ten with a best time of 1:04.8613.

Final practice and qualifying for the Honda Indy 200 will occur tomorrow, with coverage of Sunday’s 90-lap event starting at 3 pm live on the NBC Sports Network.