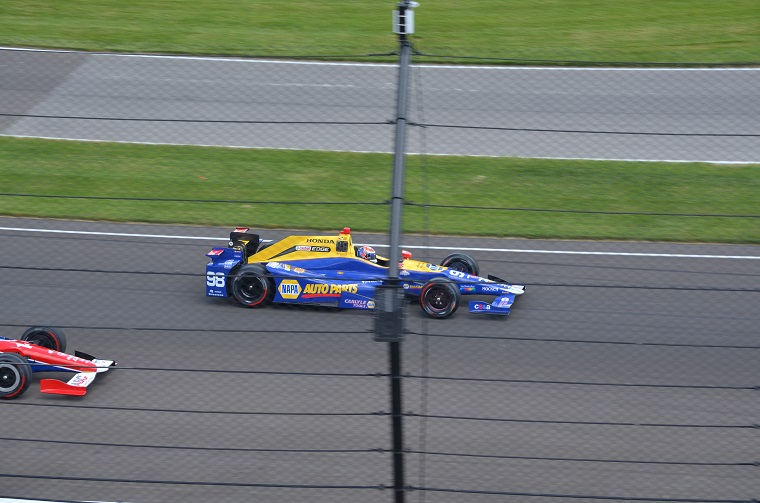 Alexander Rossi at the wheel of his Honda-powered IndyCar at the 100th Indy 500
Photo: Doctorindy

In 2016, Honda accomplished something historic: it won the 100th Indy 500 with Alexander Rossi, a 24-year-old rookie, at the wheel. He became only the ninth first-year driver in history to win the prestigious race, and now his car is going to be available at the Mecum auction house during August’s 2018 Monterey Car Week.

The car uses a Dallara DW12 chassis and a twin-turbocharged Honda V6 racing engine. Honda Performance Development has agreed to return the original race-winning engine, which surpassed 230 MPH around the oval, to the chassis in 2020.

The livery is a relatively simple blue and yellow, similar to the design Andretti Autosport still uses today in the IndyCar Series and which has since become associated with top performance IndyCar racing.

It’s not every day that a modern race car is put for sale, making the upcoming event particularly significant. The auction will open on August 25 near the tail end of the Monterey Car Week, which will conclude on the 26th with the Pebble Beach Concours d’Elegance.

Other high-profile cars expected on the auction block include the 1958 Porsche 550A Spyder, Bugatti Veyron, Pagani Huayra, and LaFerrari. None, however, are quite as fast as the Honda IndyCar, even though it’s likely not to be the most expensive vehicle there.

A single IndyCar costs approximately $300,000 to $400,000 to build (though actually racing it in the series costs closer to $1 million). We’re curious to see how much the added prestige of having won the 100th Indy 500 will fetch at auction.