The Institute for Highway Safety (IIHS) has added more challenging technology guidelines to its already rigorous testing standards for 2014. Not only are vehicles tested on their ability to protect occupants in the event of a collision, but now vehicles are evaluated on how well they prevent or mitigate front-to-rear collisions, and no cars do it better than Hondas.

In total, six Honda and Acura models earned the IIHS’s highest distinction of a Top Safety Pick+, which is more than any other automaker. The Honda Odyssey became the only minivan to ever earn the honor, and the Honda Accord Sedan and Coupe, Honda Civic Sedan, Acura MDX, and Acura RLX all joined it.

“As the industry leader in TOP SAFETY PICK+ ratings for 2013 and now 2014, it’s clear that our commitment to offer advanced safety technologies on mainstream products continues to pay dividends to Honda and Acura customers,” said Art St. Cyr, vice president of product planning and logistics at American Honda, in a press release. “Honda and Acura vehicles should be at the top of the shopping list for those who value safety ratings and the engineering prowess required to achieve them.”

Does Honda’s safety supremacy surprise you? Let us know who would have been your pick as the safest vehicles on the road in the comments below! 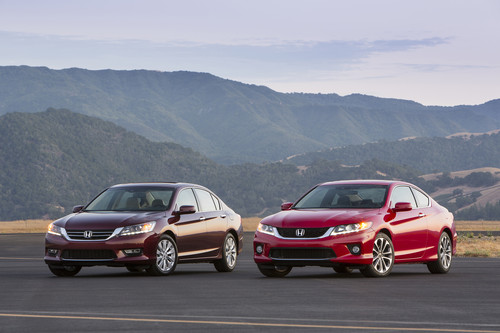 The 2014 Honda Accord coupe and sedan are both Top Safety Picks according to the IIHS.