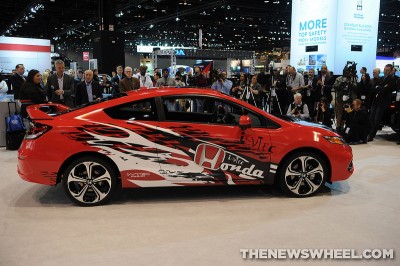 This past Friday at the Chicago Auto Show, Honda North America’s assistant vice president of advertising Tom Peyton and Turn 10 Studio’s Kim Wolfkill unveiled a real life version of the former’s Honda Civic Si Coupe that had been adorned with livery designed in the latter’s Forza 5 (available now for Xbox One) with a little help from its creator, gamer Tiffany Labedz. The Forza Civic Si Coupe, a one-of-a-kind creation, is an illustration of Toyota’s commitment to ingratiate itself to gamers around the world (the FT-1 Concept was previously made available in Forza rival title Gran Turismo)

Labedz—of Phoenix, Arizona—had her design selected as the best among 170 other entries by the more than 17,000 members of the Xbox Forza community. Her reaction was one of amazement and pride upon seeing the sheet pulled off of her real-world rendered creation. (Tiffany is standing by the left rear wheel of the Forza Civic Si Coupe in the Vine below.)

“At Honda, we love meeting our customers where their passion lies, and the  racing and custom car design in Forza Motorsport is definitely a passion for so many Honda and Civic enthusiasts,” said Tom Peyton, assistant vice president of advertising with American Honda Motor Co., Inc, in his pre-reveal remarks. “Taking an immersive gaming experience like Forza and bringing it to life here at the Chicago Auto Show will make for an exciting exhibition and a real-life demonstration of how cars and gaming are increasingly intertwined.”

For more coverage of the 2014 Chicago Auto Show, stay tuned to the News Wheel this week!