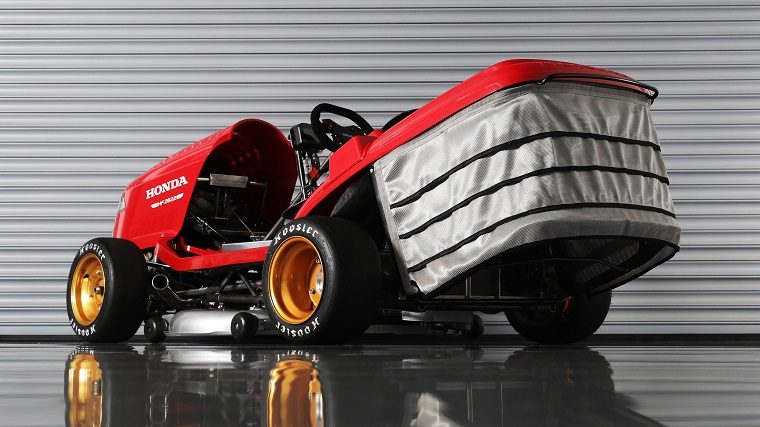 The Mean Mower V2 will make its debut at the Goodwood Festival of Speed, but before that happens, Honda put the mower to work by trimming the lawn at the Duke of Richmond’s estate in preparation for the event.

With 190 horsepower under the hood and a maximum lawn-mowing speed of 50 miles per hour, it probably didn’t take very long, even with the cameras rolling.

The original Mean Mower set a Guinness Book record in 2014 by reaching a top speed of 116.6 MPH, but it was beaten a year later by a group of insane Norwegians who put a Corvette engine in a Viking T5 mower and raced it to 133.6 MPH.

This second iteration of the Mean Mower is even more incredible. It derives power from a 999 cc four-cylinder taken out of a Honda CBR1000RR Fireblade SP motorcycle — that’s an engine that produces 189 horsepower at 13,000 RPM and 86 pound-feet of torque.

With the Fireblade unit fitted over the chassis of HF 2622 riding mower, Honda believes it will do at least 150 MPH. The Mean Mower also uses the Fireblade’s clutch, ECU, six-speed transmission and even its LCD display. If that weren’t enough, it boasts 10-inch ATV wheels dipped in anodized gold and wrapped in specially-made Hoosier racing tires.

And yet the Mean Mower V2 will still cut the grass if you wish it too — after all, it couldn’t well take the title of “world’s fastest lawn mower” if it were just a glorified high-speed kart. To do so, it uses a modified cutter deck with carbon-fiber blades. Just that.

Jess Hawkins, who currently stunt-drives for the Fast & Furious Live touring show, will be the lucky racer to get behind the wheel of the hot rod lawn mower for the record attempt.