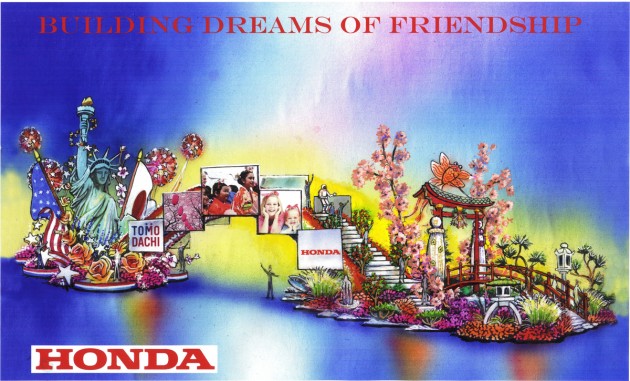 Honda is entering its fifth year as the presenting sponsor of the Rose Parade, the iconic New Year’s celebration that takes place each year in Pasadena, California. For the 126th Rose Parade, which will take place on January 1st, the Japanese automaker is doing something special: Honda’s 2015 Rose Parade float entry, Building Dreams of Friendship, will reunite Japanese earthquake survivors with the American first responders who provided aid to them in the aftermath of the natural disaster.

Japanese students affected by the Great East Japan Earthquake and tsunami of 2011 and the US military service members who were involved in the subsequent humanitarian relief effort will ride together on the float. The Building Dreams of Friendship float itself features evocative imagery including the Statue of Liberty, a torii (traditional Japanese gate), the flags of both nations, and other iconic symbols that are meant to represent the partnership between America and Japan.

“The story of the people of the affected regions of Japan, as well as the United States servicemen and servicewomen who helped them following the earthquake and tsunami, is truly inspiring,” said Steve Morikawa, Assistant Vice President of American Honda Corporate Community Relations. “Honda is proud to celebrate the friendship of our two countries and recognize the United States military for its role in the relief effort.”

As presenting sponsor, Honda’s 2015 Rose Parade float will be the first in the parade. Additionally, the all-new 2015 Acura TLX will serve as the Rose Parade’s official pace car, while the 2015 Honda CR-V will act as the sound car.

The 2015 Rose Parade will be broadcast beginning at 8:00 am on Thursday, January 1, 2015. Check your local listings to find out which channel will be carrying the parade in your area.