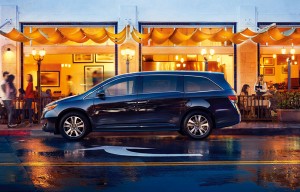 In order to promote the 2014 Odyssey, which boasts the first-ever in-vehicle vacuum cleaner, Honda has launched a new ad campaign showing the HondaVAC’s effectiveness against the assorted kinds of crud that may be lurking beneath the seats.  To help drive the point home, Honda has tapped the familiar vocal talents of actors Neil Patrick Harris and Rainn Wilson to voice their “Spokescrumbs.”

Harris features in the “It’s Here” ad, which sees him star as a dust bunny extolling the comforts of the Odyssey’s luxurious and spacious interior to his crummy cohorts, which include a discarded curly fry and a doom-preaching gummy bear holding a cookie that reads “The End is Near.”

Wilson stars as a broken blue crayon in “Owner’s Manual,” where he points out the numerous features of the 2014 Odyssey before stopping out of sheer terror when stumbling upon the HondaVAC section.

Both ads see the celebrity-voiced Spokescrumbs and their mates sucked up into the Odyssey’s vacuum, ensuring the owners a spotless ride.

In an interview with AdvertisingAge, American Honda’s Assistant Vice President of National Advertising Tom Peyton laughed at the notion that Honda was sending the wrong message by vacuuming up adorable and magical creatures more akin to the ones you might find in Toy Story and, presumably, sending them off to an unfortunate death or an eternity in garbage limbo.

“They’re memorable and likable,” he said.  That may very well be true, Mr. Peyton.  They most certainly filled our hearts with a small glimmer of joy before being whisked into the belly of the 2014 Honda Odyssey’s HondaVAC.  But now they’re gone, you monster, and we don’t know that we can forgive you.

Honda will also utilize networking tie-ins with Fox TV’s “The X Factor” and mobile games Angry Birds Star Wars and Words With Friends.  Pricing for the 2014 Odyssey begins just below the $30,000 mark and tops out around $44,450 with all available bells and whistles.