Hoover Carts: How People Drove Cars in the Great Depression

The economy has a substantial impact on trends in the transportation industry. Currently, U.S. consumers have extra money to spend and gas prices have been relatively low, so consumers have been purchasing new, gas-guzzling SUVs and trucks. When the economy is down and money is tight, consumers lean the other way, opting for pre-owned, fuel-efficient sedans and compact crossovers.

Almost a century ago, the Great Depression struck and had a major impact on transportation methods and options in America. Families who relied on automobiles for travel suddenly found themselves without the means to pay for fuel or maintain their vehicles. Automobile transportation suddenly became a luxury for most people, so they had to find an alternative transportation method.

That’s when Hoover carts appeared on the scene.

Thrifty Car Shopping: Tips for buying your first car so you don’t wind up upside-down 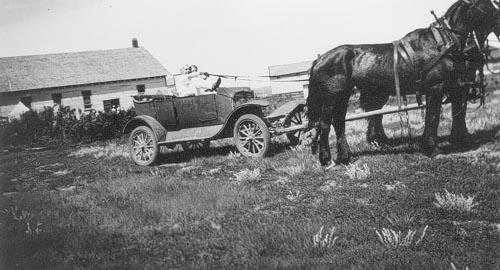 A Hoover cart — sometimes referred to as a Bennett Buggy — was a slang term for a car that had its engine stripped and windows removed. This allowed the open-air vehicle body to be pulled by a mule or horse, just like a non-mechanical cart would be. Cars were also stripped and used for parts, such as attaching the wheels/axle to a a wooden cart instead of the original metal frame. Stripping the car of its essential components may seem drastic, but it was the only way many people could afford to travel during the Great Depression.

This practice became pretty common, especially in rural areas where farmers had finally saved enough money in the booming 1920s to buy their first vehicle… only to be hit hard by the Great Depression. Gasoline was not always accessible, and what was for sale was heavily taxed due to the economic downturn.

The use of Hoover carts is one aspect of life during the Great Depression that we’ve forgotten over the years, but its legacy has been preserved in historical accounts and even literature, including a mention in Harper Lee’s To Kill a Mockingbird: “Maycomb was an old town, but it was a tired old town when I first knew it. In rainy weather the streets turned to red slop… [s]omehow it was hotter then… bony mules hitched to Hoover carts flicked flies in the sweltering shade of the live oaks on the square.”

Hopefully we will never see a time when we’ll again have to turn our cars into mule-drawn buggies.

Tips for Saving Money: The many benefits of purchasing a used car