How Did Vehicle Gas Pumps and Fuel Dispensers Originate?

There are many things in our world that we take for granted, including everyday inventions like the gas pump that we depend on to keep us rolling. But, just like the automobile didn’t always exist, fuel dispensers didn’t always exist; at some point, they were invented–and they weren’t like the massive, streamlined contraptions we have now.

So how did gas pumps–or, “filling stations,” as you might know them–come to be? Let’s look at their history…

Looking for New Tires? We have all the information you need to know

Pump It Up! The Origin of the Gasoline Pump 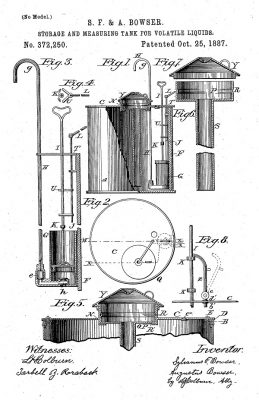 A patent for the gasoline fueling pump

If you’ve ever wondered where the first business with a pump dispenser was, you may be surprised to find out that it was a grocery store in the great city of Ford Wayne, Indiana.

It began in the mid-1880s with an invention by Sylvanus F. Bowser: a pump that could accurately measure and dispense liquids. That’s why fuel dispensers are known as “bowsers” in some areas of the world.

Designed to hold 42 gallons of kerosene using a wooden plunger and a barrel-&-funnel dispensing method, the product was originally created for lamps and stoves. However, the contraption had the ability to dispense other liquids, with its patent claiming “kerosene-oil, burning-fluid, and the light combustible products of petroleum.” Thus, it was named the ““Self-Measuring Gasoline Storage Pump.”

Bowser sold his invention to businesses in the mid-1880s and they were quickly a hit. As automobiles were invented, Bowser made adaptations to his creation to make it safer and optimized for automobiles, using a forced-suction pump and hose to feed directly into the car’s tank.

Other rival products had been created and sold during this time, so it’s uncertain where the very first gasoline filling station was. Some claim Standard Oil of California, others claim The Automobile Gasoline Company of St. Louis.  The modern drive-in station with an open pagoda and self-service was erected in Pittsburgh in 1913. The business sold 30 gallons on its first day (stations now easily sell 12 times that) at a mere 27 cents per gallon.

We’ve come a long way since then–especially in the price of gas!

Before You Buy... Getting an estimated credit score here can save you a headache