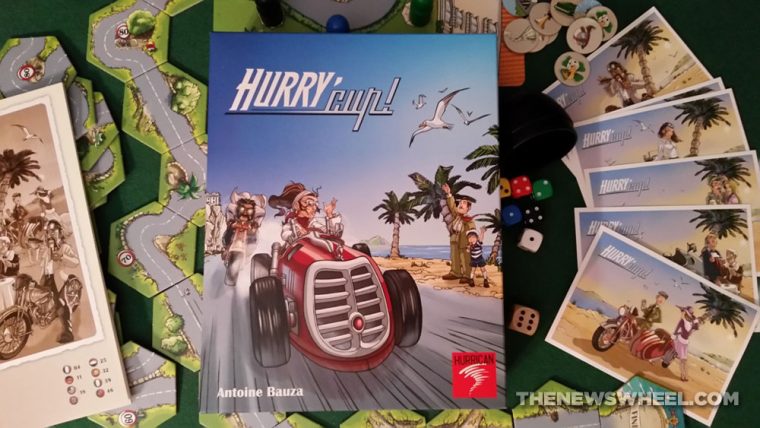 If there’s one thing motorsport racing isn’t, it’s definitely not slow. The best races are when drivers put the pedal to the metal. So why are many car racing board games so slowly-paced and take forever to play? Most fans of racing enjoy it for that–the race. So a heavily-involved, strategic tabletop ordeal doesn’t really simulate the thrill of real racing.

Hurrican Games has come up with a clever way to make tabletop racing feel like an actual race–by adding a fast-reaction element to keep players on their toes. Hurry’Cup!, a fast-paced Cannes-to-Monaco rally set in 1925, challenges players to outrun their competitors. 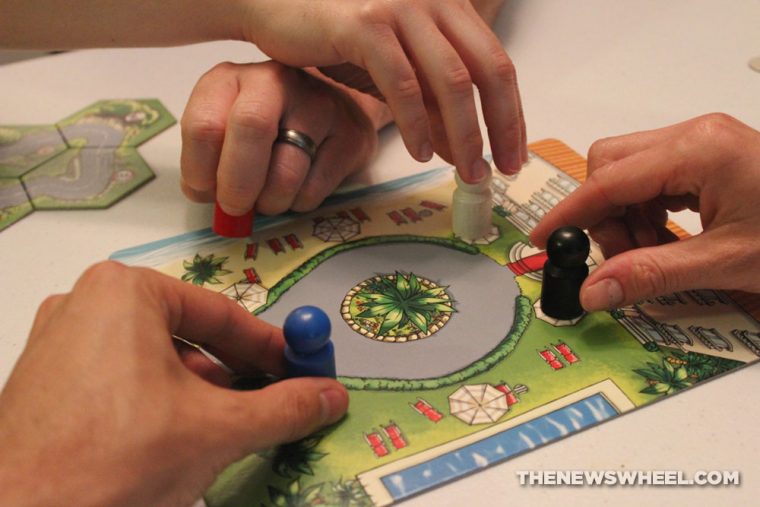 To win Hurry’Cup!, be the first person to cross the finish line on the race course.

Before the game begins, use the three-dozen hexagonal tiles to build a winding track from the starting board to the finish line. Give each player three trump chips and a car token of their choice. Once all cars and components are in place, the race begins.

Cars advance down the track based on dice value. To obtain dice, one player secretly rolls multiple dice corresponding to the number of participants. When the dice are revealed, all players must race to grab the colored pawn corresponding to the colored dice’s value that they want. This dice, when combined with a separate dice rolled later, indicate how many spaces a car may move and at what speed.

Certain spaces must be taken at low speeds or else the car will be forced to stop moving forward. The racer in last place is given the benefit of a future re-roll, while those who get stuck on a space are allowed to jump over that space. Special trump tokens are to get first dibs on a die, ignore dice rolls, take short-cuts, or other benefits. 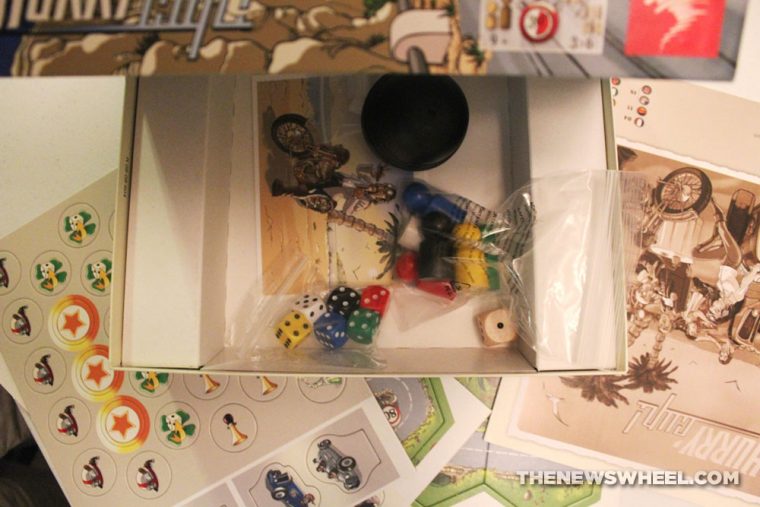 The most important components of Hurry’Cup! are high in quality. The dice are colorful, the pawns are big enough to grab easily, the cars tokens are detailed but not unwieldy, and the hexagonal track tiles are the perfect size.

The modular track allows variety time you play. The whole track doesn’t take up much space, thanks especially to the hexagonal shapes that can be arranged compactly. However, because the tiles slide around when the pieces are grabbed, I’d recommend playing on the carpet for added traction.

The team indicator postcards could’ve been printed on thicker cardboard because they’re fairly flimsy and bent after our first game.

I did personally feel that the cover design on the box was underwhelming. The art on it looks somewhat exciting, featuring the same cartoon art style as the components do, but there’s a lot of empty space. The title could’ve either been larger or the graphics spread out. I’ll admit that, based on the look of the box, it’s not a game that would catch my attention if I saw it on a shelf. 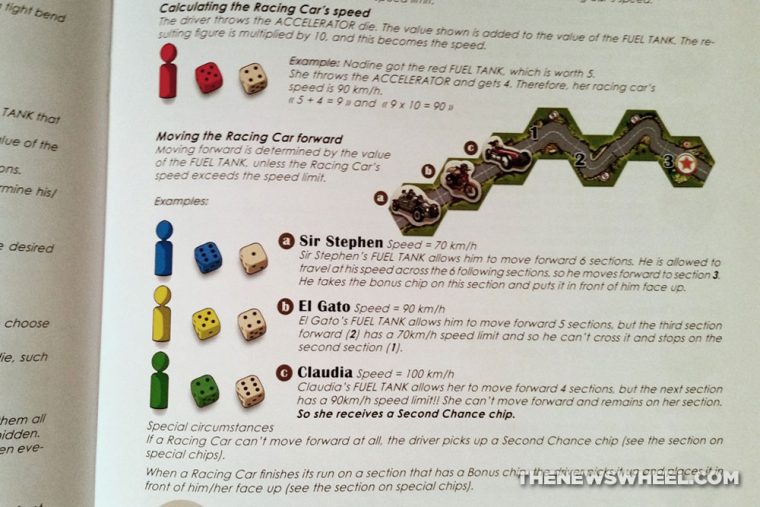 The instruction booklet for Hurry’Cup! looks intimidatingly long when you pick it up…until you realize that it’s translated into half-a-dozen different languages. The English portion is only a couple pages and is quite simple to follow. There’s a good mix of simple wording, step-by-step directions, example scenarios, and accompanying images. In fact, the game is easy enough to read and teach all at once. It might take a couple turns for some players to understand how the dice calculations work, but that doesn’t hinder their experience.

The character profiles are endearing and add to the theme of the game, too.

Blacktop Brutality! This hilariously morbid card game is all about making roadkill… 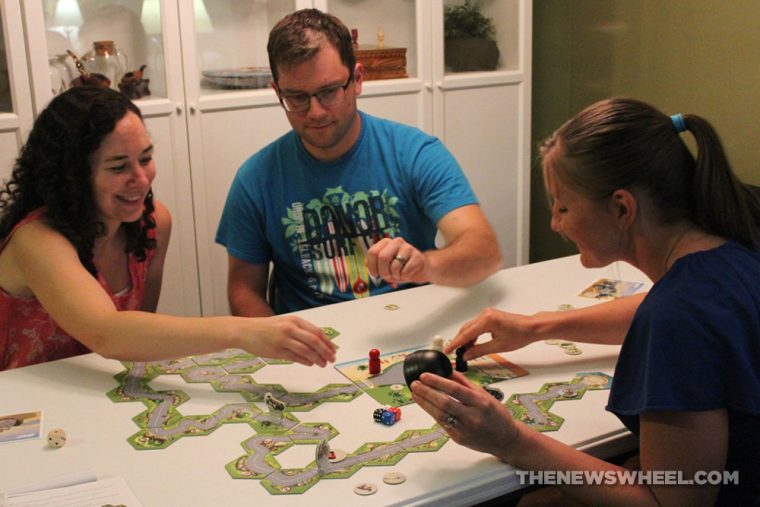 Because of some negative reactions Hurry’Cup! has received from the gaming community for its dependence on reaction time–and for being slow myself—I went into this game not thinking I’d like it. But, I surprisingly enjoyed it.

I’m slow in thinking and reacting (I opt for contemplative games), so I never won the grabs. But, enough safeguards (the lantern, clover, power-ups) and random chance are in place to let slower players stay in the game. This led to drastic changes in rank each round. That “handicap” may frustrate more competitive people who don’t think the “losing” players should be given so many chances to “catch up.” Plus, you have to make an effort to remember to pick up certain tokens each turn, which can be easy to forget.

Compared to the many auto racing board games I’ve played, Hurry’Cup! isn’t the most involved, unusual, or ingenious–but it’s arguably the most energetic. The dice-grabbing mechanic may sound messy in theory, but it actually works. The reliance on reaction time and speedy computation amp up feelings of anticipation and tension. And–unlike most racing games–all players participate at once instead of waiting patiently for their turn. This keeps everyone engaged throughout, which will appeal to players who get bored quickly.

Thus, the best audience for this game is a family with children ages 10-13, who are transitioning from kids’ games to adult games. It’s an easy game to learn and engages different learning styles–visual, logical, kinesthetic. It can even be scaled down to teach younger kids basic math; just remove the power-up tokens and/or speed limits. Risk-reward decisions can also be taught using Hurry’Cup! And, slower players will still feel engaged because no one misses out on receiving a die.

Hurry’Cup! is a simple, visceral game that is sure to get your adrenaline pumping. It deftly balances strategy, skill, and luck into one activity that your family will enjoy playing together.

Hurry’Cup! is available for purchase through the publisher’s website, Amazon, Miniature Market, and other retailers.