Tucson drivers have their own official group logo!
Photo: Hyundai USA via YouTube

Did you realize there are superheroes living among us? We’re not talking about ones that wear spandex uniforms or have telekinesis–these people are helping make a difference by ushering in change that transform the world. They’re people just like you.

Prepare to meet The League of Tucson Fuel Cell Drivers.

Related: The debut of the newest Tucson

Eight spotlights will be revealed for Hyundai’s League of Tucson Fuel Cell Drivers marketing campaign, not including the promo video above. Each video–about 90 seconds long–showcases the life of a Tuscon owner in southern California, where the 2016 Tucson Fuel Cell vehicle is being sold (in a limited quantity). So far, three videos have been released:

Blue Lightning: Celso Pierre is a mechanical engineer in the automotive industry who is drawn to the fascinating, world-changing potential of hydrogen technology. Whether heading to the beach for surfing or forest for hiking, the Tucson is perfect for his active lifestyle.

Mother Nurture: Dr. Carolyn Rowley wants the car she drives to reflect who she is. Thus, by founding an orphanage and cultivating an award-winning sustainable garden, her perfect vehicle’s only emission is water.

Eco-Master: Nancy Gillespie breeds shiba inu dogs, so she needs a vehicle with a lot of room for her canines. She knows that zero emissions transportation is the way of the future.

The emphasis of Hyundai’s ads for the Tucson are how hydrogen technology can change the planet (by preserving it) and how it’s helping people reach their full potential. The videos are punctuated with vibrant, dazzling comic book-like artwork and clever superhero names–making them a lot of fun to watch. Follow the rest of the videos as they’re released at Hyundai’s Tucson webpage. 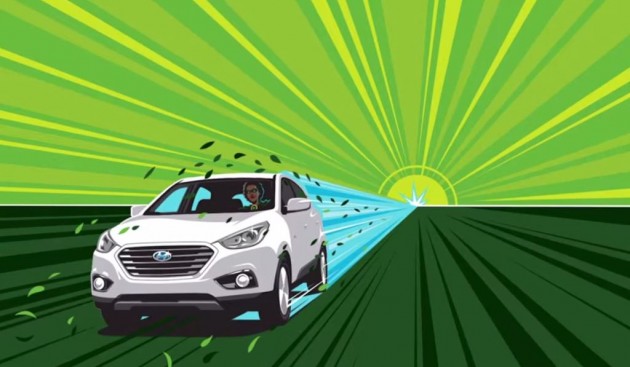 Related: What’s cool about the Rally Edition of the Veloster