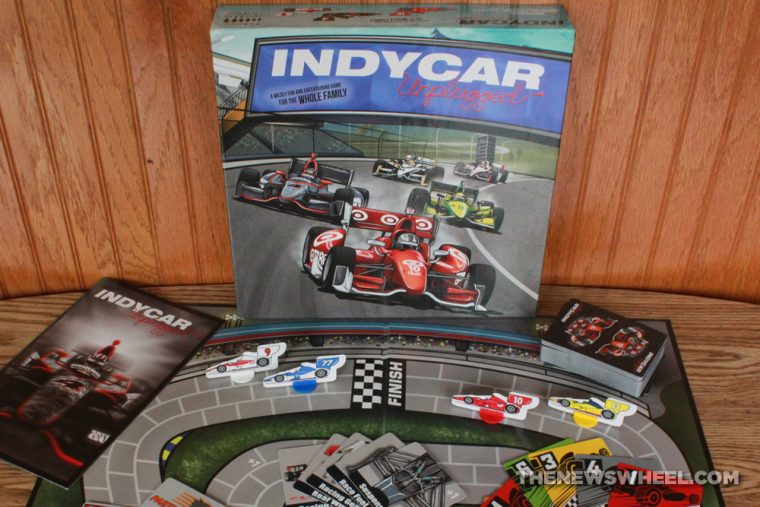 For as many NASCAR board games that have been released over the years, it’s surprising that IndyCar racing hasn’t received the same attention–especially since the motorsport has been around for a hundred years.

One of the few tabletop racing games that embraces American Championship car racing is the colorful, family-oriented INDYCAR Unplugged from Good Ole Games. The game is a variant of–utilizing most of the same mechanics as–the previous year’s Motocross Unplugged, also created by the same people. The title suggests the publisher’s intent to create games that kids can play without the use of electronics.

INDYCAR Unplugged is a simple racing game but also a fun, accessible introduction to the sport and other, more complex games. 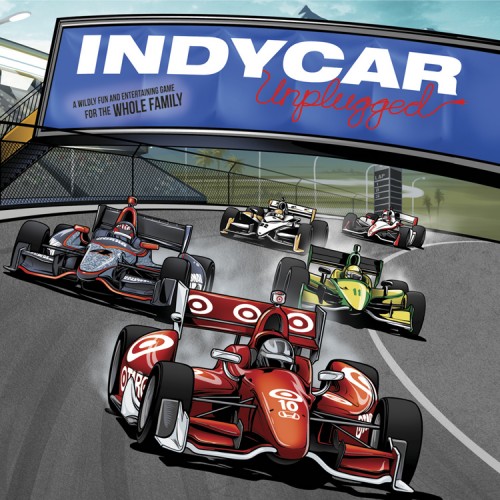 Looking for a More Adult Racing Game? Read our review of the irreverent, competitive Thrash-Car 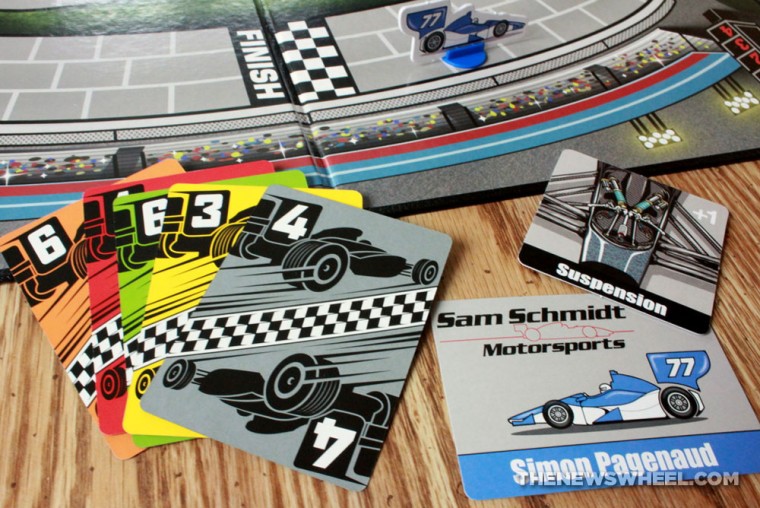 Like most racing games, the goal of INDYCAR Unplugged is to be the first to cross the finish line on the race track.

Each player controls one of six available Indy cars, each representing the vehicle of a real-life IndyCar driver (JR Hildebrand, Scott Dixon, Tony Kanaan, Dario Franchitti, Josef Newgarden, & Simon Pagenaud). The car tokens begin at the starting line and move around the track in turns by playing pairs of numbered movement cards of the same color (e.g. a green “3” card and green “5” card). The total value of the two cards is the number of spaces moved.

Players can boost their movements with special cards and vehicle upgrades acquired along the track, while their progress can be hindered by detrimental cards played against them by competitors.

The rule book contains detailed profiles on each of the six featured IndyCar drivers, including biographical notes and career highlights. Because a portion of each IndyCar Unplugged game sold goes to support Racing for Kids, information on the charity is also contained in the booklet. 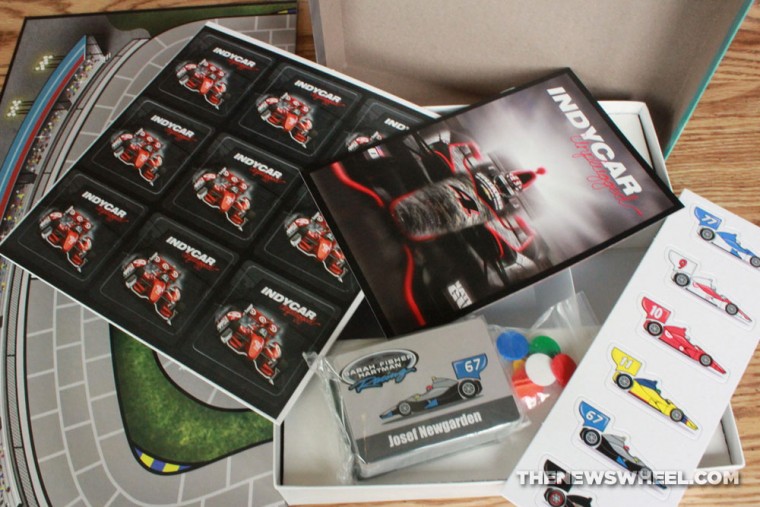 The INDYCAR Unplugged box is the perfect compact size to fit on your game shelf, being the same square size as many modern board games. It’s vibrant and energetic without looking too “cartoonish.”

Upon opening, all components were tightly wrapped and sealed. Once everything is unwrapped and punched out, the box has small dividers to keep the pieces from sliding around. The playing cards are the perfect size and printing quality, with bright colors that clearly identify each type of card. The board unfolds into a winding, twisty track that maximizes the number of spaces on it. Plus, it’s nice that the spaces/lanes aren’t identically even and there are advantages to positioning in each lane.

My only frustration with the components is the size of the car tokens, which are much too big to fit in the spaces on the track. While I understand the intent to mirror the details of each token to their ID card designs, they get jumbled and crowded on the board–especially with six players. 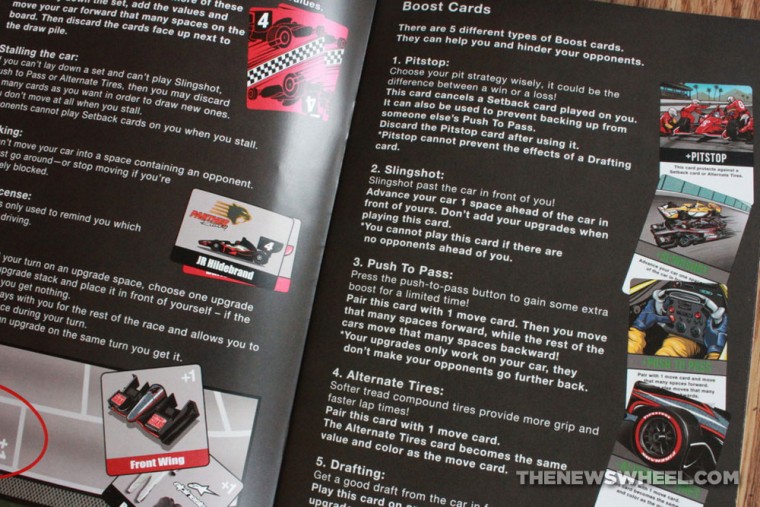 The INDYCAR Unplugged instruction booklet is fairly easy to read, explaining the turn sequence followed by each of the special cards. These are all accompanied by images of the cards, making it easy to reference later if necessary. It only took a couple minutes to read through–as an adult–and explain the game to the rest of the players. The only hurdle was that the drafting instructions (especially drawing replacement cards) were hard to understand based on the wording until we played through the game.

As we played INDYCAR Unplugged, we did have to create some house rules, as the directions didn’t go into detail about side-to-side board movement or upgrades obtained via Push-to-Pass. We also spent the first few rounds discarding and drawing new cards until we decided to up the hand limit from five to six cards, which got things rolling.

Ride on the Hollywood Fast Track: Read our review of the official Fast & Furious board game! 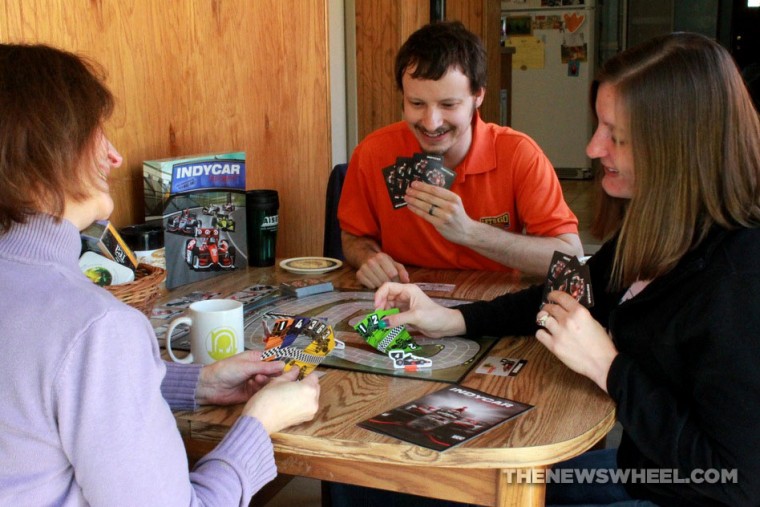 For all the board games on the market for younger players, there are few that actually involve car racing–and even fewer that involve IndyCar or F1-type racing (other than, say, Monza). That’s why INDYCAR Unplugged appealed to me when I first discovered it. It makes a fitting gateway for younger players to learn about the motorsport and its stars (although the specific branding/drivers will date it in time).

The movement mechanics in INDYCAR Unplugged are similar to those in other racing games, which will undoubtedly draw comparisons. But, despite there being many other, better racing games that INDYCAR Unplugged could be compared to (that would satisfy more experienced adult gamers), this family-oriented activity from Good Ole Games is perfectly suited to those with elementary-age children. 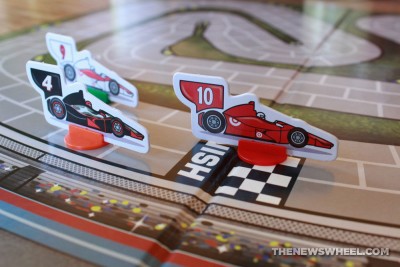 The color-based card movement system can help children practice color identification, addition/subtraction, spatial movement on the board, and basic strategy. Game play can even be further simplified with the removal of upgrade tiles and/or boost cards. Also, the movement mechanics in INDYCAR Unplugged do not favor more experienced gamers; this keeps young and old players equally matched. When I played, the cars stayed fairly close together, with any far leads quickly being narrowed.

While the selection would’ve been very limited at the time of publication, it would have been nice had the game featured a female driver (such as Danica Patrick) to appeal to girls who’d otherwise not have interest in the game.

INDYCAR Unplugged is a rare family racing game that, as it advertises, all generations can enjoy. If you have children, introduce them to tabletop auto racing with this simple, affordable starter game.

INDYCAR Unplugged is available for purchase online through Amazon, Sears, and eBay.