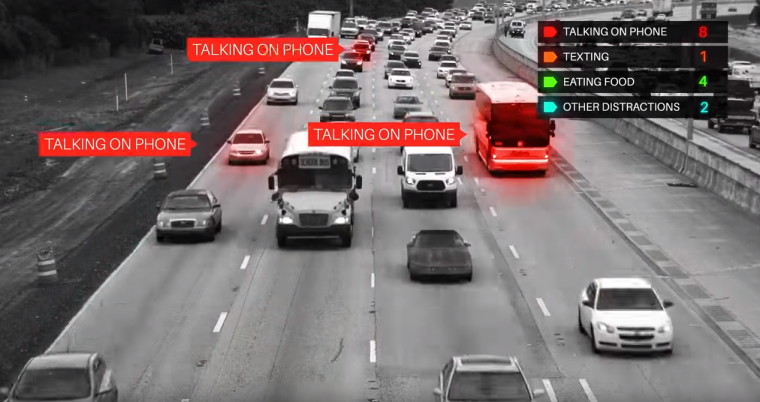 Distracted driving has officially become the safety problem of the 21st century. Thanks to cell phones, the number of distracted drivers is only increasing, making driving distracted one of the top causes of automobiles accidents and automotive-related fatalities.

To give everyone an idea of just how often people drive while distracted, SR-22 Insurance Agency decided to film 20 minutes of rush-hour traffic on one of South Florida’s most popular roadways—I-95. During these 20 minutes, the video caught 2,151 cars. Of these 2,151 cars, drivers of 184 of them were either on the phone, eating, or doing something else that made sure they weren’t paying attention to the road. In case you don’t have a calculator near you, that’s 8%. Eight percent of the drivers on I-95 were distracted during the busiest time of the day.

Excuse me; I have to get up on my soap box for a second.

Distracted driving is bad, guys. This isn’t new information. There have been so many studies done recently that detail the dangers of distracted driving. According to the National Safety Council, drivers who are talking on their phone—with or without using their hands—are four times as likely to be in an accident. In 2013 alone, more than 3,100 people were killed because of distracted drivers and 424,000 were injured. It’s gotten to the point where distracted driving is as bad as drunk driving.

Each is based on a stupid decision. Each is a dangerous act that puts your own life and the lives of others in jeopardy. Each can be fatal.

So why do we feel like it’s okay to do other things while operating a (on average) 4,000-pound piece of metal that’s traveling at about 65 mph?

And why doesn’t distracted driving have the same stigma as drunk driving?

Go ahead and think about that for a second.

Stay Safe Out on the Road: Find out which Mitsubishi models earned Top Safety Picks

The SR-22 study found that the biggest distraction for the 185 distracted drivers it caught on film was talking on the phone. Texting came in a distance second, followed by eating. Finally, the “other” distractions, such as reaching towards the backseat and putting on makeup, were lumped into a single category.