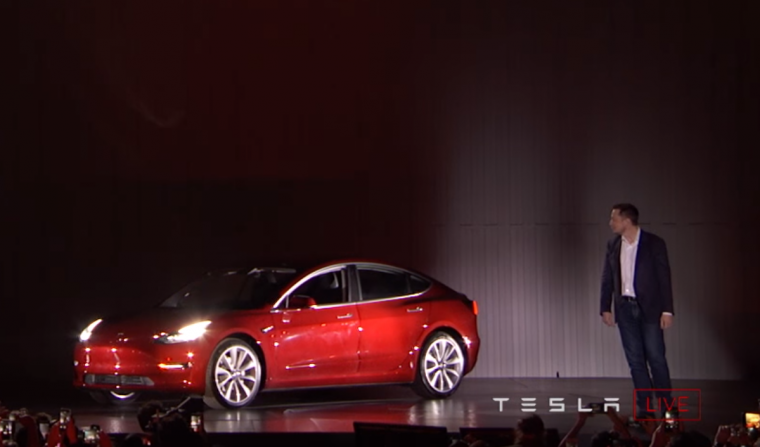 It’s officially here: the Tesla Model 3 is out and ready for mass production.

To introduce the model and hand off the first 30 vehicles, Elon Musk made his grand entrance: Musk drove the Model 3 right up onto the stage, with hyped up music playing in the background and an enthusiastic audience cheering and hollering. The audience, however, is not your typical crowd. With the live stream taking place from the Tesla factory itself, the audience consisted of the Model 3’s designers and engineers. In other words, it was the people that made the Model 3 possible and turned it into what it is today.

Musk wasted no time before diving into the details of the new model. The Model 3’s interior removes all of the unnecessary gadgets and controls that are becoming obsolete. “We aimed for something that was a very simple, clean design,” explained Musk. “In the future – well, really, the future being now – the cars will be increasingly autonomous.” Musk explained that the instrument panel has become unnecessary in the world of autonomous cars – the vehicle takes care of all of that for you. “Every Tesla being produced right now – the Model 3, the Model S, the Model X – has all of the hardware necessary for full autonomy.”

While Tesla has been diving into the world of autonomous vehicles for quite some time now, the Model 3’s introduction comes on the heels of Facebook’s hiccup with Artificial Intelligence technology. However, Musk and Tesla’s research does not seem to be phased by the social media site’s research troubles.

Alongside the simplification of the vehicle’s features was the biggest challenge of all: creating a smaller vehicle without sacrificing the open-space feeling inside the cabin. To combat the resizing of the vehicle, designers took the same canopy glass design from the Model X and integrated it onto the rear roof panel of the Model 3. This way, passengers can have ample headroom while enjoying an open view.

Safety is a huge component of the Model 3. As a demonstration, Musk projected an image of the Tesla Model 3 crash test alongside a Volvo S60, a vehicle with a 5 Star Safety Rating in all categories. You can see for yourself (below) the difference – however, Musk assures the audience that he does not mean to say the Volvo is an unsafe vehicle. “The Volvo is arguably the second safest car in the world,” he said. “But I think it’s obvious which car you would prefer to be in in an accident.”

While the reveal of the Model 3 is an exciting time for the company, Tesla is struggling with the Model 3 production rate. With the new Model 3 in such high demand, and the difficult nature of its production, the innovative company is struggling to keep up with the vehicle’s market. The Model 3 has over 10,000 unique parts inside each vehicle; “The production rate will move as fast as the slowest and least likeliest component in the whole mix,” explained Musk. He went on to explain that there are three components of the production process – the battery factory, the car factory, and the supply chain – that have to work together seamlessly to produce each vehicle. The next six to nine months are crucial for vehicle production, with the initial demand being so strong. “Frankly, we’re going to be in Production Hell,” Musk told the designers and engineers. “Welcome, welcome!” 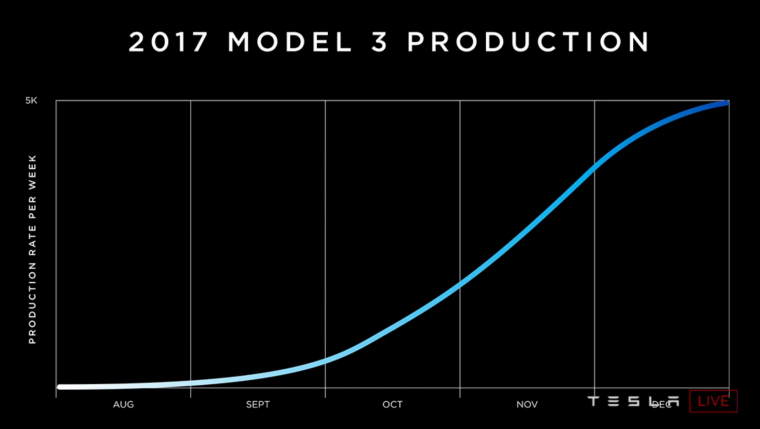 A charging station for a Tesla vehicle is the equivalent of a gas station for a gasoline vehicle; however, in the (slightly lagging) world of automotive, electric car charging stations are not as easy to come by. “This is probably the second most common question I get on Twitter,” said Musk. “Like, ‘The Supercharger is full. What is wrong with you? Why are you such a huge idiot?'” Musk and the rest of the audience laughed. “I’m like, ‘Sorry!'”

Finally, Musk dove into the basic specs of the Model 3. The Model 3 will be available at two trim levels: Standard and Long Range:

“You will not be able to find a better car, gasoline or electric, in that price range,” Musk guaranteed.

From there, Musk hopped off stage and made his way over to the lineup, where 30 production Model 3 vehicles were sitting, waiting to be handed off to their new owners. Of the 50 Model 3 vehicles produced this month, 20 of them will be used for engineering validation. The remaining 30 sat just off stage and will be on the roads this year.

Elon Musk ended the live stream by expressing his gratitude to Tesla’s dedicated following: “To those that have lined up to buy a Model 3 and that, in some cases, spent days outside of our stores to be the first on the list, I just want you to know that really matters to us. […] We’re going to do everything we possibly can to get you the car as soon as possible. We’re going to work day and night to do right by the loyalty that you’ve shown us. Thank you.”

Today, there are three Tesla models in production: the Model 3, the Model S, and the Model X.

According to Musk, if you order a Model 3 today, you’ll receive the vehicle by the end of next year. However, since the other two models are already in production, you can receive those vehicles within 1-2 months.

You can watch the full live stream below: