Jan Schakowsky (D-Illinois) asks the question on the minds of many: "Is The New GM responsible?" 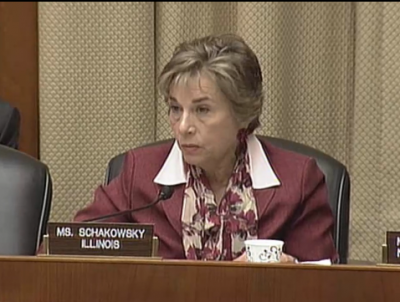 Mary Barra’s testimony before the U.S. House Energy and Commerce Committee’s Subcommittee on Oversight is still going on, and we’ve only just now had some of the more important questions asked. After enduring a yes/no question barrage from John Dingell (D-Michigan) and the perpetual indignation of Joe Barton (R-Texas), who at one point legitimately used the term “gobbledygook,” we have finally had some legitimate questions asked, mostly by Jan Schakowsky (D-Illinois). The most pressing of which: “Is The New GM responsible?”

Prior to Schakowsky taking the floor, the most informative bits of Barra’s testimony included her admission that, to her knowledge, former GM CEO Dan Akerson was not aware of the significance of the problem. Also of interest was the fact that Barra did not rule out the potential of a cover up or of the lack of action being necessitated by GM’s bankruptcy, rather stating that Jenner & Block LLP Chairman Anton Valukas will uncover the answer to those questions as his investigation continues.

Barra mostly answered questions with the same sort of tone that she has shown in the past, expressing regret and promising that General Motors will, under her watch, make the changes necessary to ensure that nothing like the massive ignition switch recall ever happens again. Barton, through his disbelief, asked why a company with GM’s reputation would use parts that did not meet their in-house safety expectations. When he asked if Barra could explain how many parts GM currently has in use that are not up to code and Barra could not provide an answer, he decried her response as “not an acceptable answer…to the American people.”

Bruce Braley (D-Iowa) called attention to a part from a tool kit bearing the slogan “Safety Comes First at GM.” This devolved into a discussion as to what has changed in GM’s core beliefs over the years and whether the promise of safety was merely something with which GM induces sales. 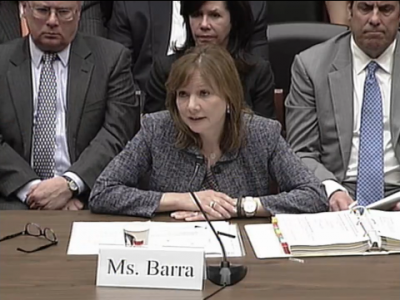 GM CEO Mary Barra: “We have civic and legal responsibilities.”

The biggest moment, however, came when Jan Schakowsky took the microphone and went immediately for the throat, calling the deaths “needless” and asking how the company will handle any deaths that occurred prior to the formation of “The New GM.” As Barra expressed that she and General Motors have civil, moral, and legal responsibilities, Schakowsky pressed and asked if “The New GM” would offer settlements to families of those who had died or been injured in accidents involving vehicles recalled by GM. Barra indicated that GM has begun working with attorney Kenneth Feinberg in order to determine their best recourse in the days to come.

The most stinging moment, perhaps, came when Schakowsky asked if GM accepts responsibility or even liability for the accidents.

While Barra would not answer directly, she did say that GM will “make the best decision for our customers” and fulfill their “moral, legal, and civic responsibilities.”

Tonko replied, “I hear the answer.”

Tune in to The News Wheel for more news from Mary Barra’s Congressional testimony.