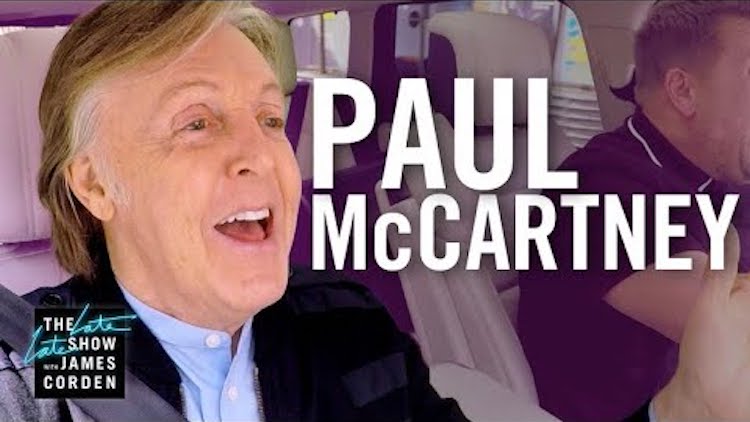 Paul McCartney is a legend. The Beatles’ music made its way across the entire globe, influencing music as a whole and artists we hear on the radio today. James Corden made a stop in Liverpool, McCartney’s hometown, for a nearly 24-minute episode of Carpool Karaoke with the Beatles’ alum.

The two started their journey through Liverpool on a logical road: Penny Lane. Of course, it wouldn’t be Carpool Karaoke if they weren’t listening to tunes, so Corden and McCartney began singing Penny Lane as they drove down Penny Lane — a picture-perfect moment. Pulling over on the side of the road, they took a selfie with the “Penny Lane” painting on the wall, and Paul McCartney left his signature with the others. Before leaving Penny Lane, they made a stop at the barber shop McCartney mentions in the song, surprising a lovely woman inside. The shop even had a black and white photo on the wall of McCartney getting his hair done a few decades back.

Once they got back in the car, McCartney told Corden what inspired him to write the song, “Let It Be.”

“I had a dream in the ’60s,” said McCartney. “My mom, who died, came to me in the dream and was reassuring me saying, ‘It’s gonna be okay. Just let it be.’ […] She gave me the positive words.” He continues to say that he’d never heard the phrase “let it be” before that dream, so he decided to channel the positivity from those words into a song.

In true Carpool Karaoke fashion, the two went on to sing “Let It Be” on the way to their next destination. At the end of the ballad, James Corden found himself wiping away real tears. “I can remember my granddad, who was a musician, and my dad sitting me down and saying ‘We’re gonna play you the best song you’ve ever heard,'” Corden said. “I remember them playing me that [song].”

“If my granddad was here right now, he’d get an absolute kick out of this,” Corden said through his sniffles.

“He is,” McCartney assured him.

After one of the most emotional moments we’ve ever seen on Carpool Karaoke, Corden and McCartney made their way to their next destination: McCartney’s old house. They went up to the door and met the current owner, who allowed them to walk through the house and relive Beatles history. McCartney even pointed out the exact spot where he and John Lennon wrote “She Loves You” (and where McCartney’s dad suggested they say ‘yes’ instead of ‘yeah,’ and they respectfully ignored his advice).

The two made their way through the crowd that had formed outside to hop in the car. Corden took McCartney to a local pub where he used to play and they decided to surprise the current patrons. People of all ages stared at McCartney, some with tears in their eyes, as they listened to him play classics dating back decades. He invited James Corden up on stage and they sang “Hey Jude” to end the episode.

Watch the full episode below: