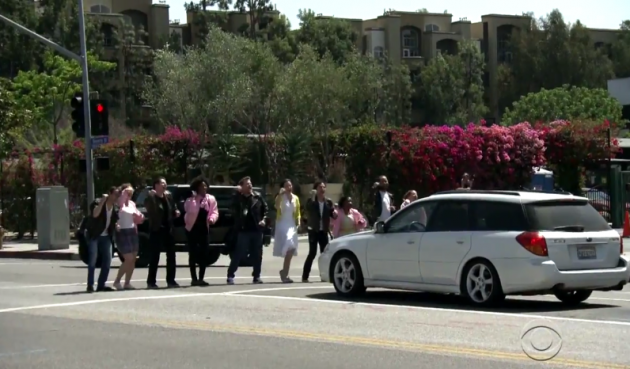 Have you been watching The Late Late Show since James Corden began hosting? If you’re a night owl, you should check it out.

Corden’s a pretty affable and down-to-earth host, his bandleader is the incredible Reggie Watts, his guests tend to be pretty entertaining, and he occasionally pulls off some hilarious stunts—like staging the summer stock classic Grease at the intersection of Beverly Blvd. and Genesee Ave. in Los Angeles, California.

The multi-talented James Corden acted as the egotistical director, producer, and star of Crosswalk: The Musical, which involved him and his cast belting out tracks like “Summer Nights” and “Greased Lightning” while cars were stopped at red lights. The drivers seemed to enjoy the impromptu performance—until, of course, the light turned green and the smiles turned to loud horn honks.

If you really enjoyed Corden’s prima donna antics, you can see a longer version of the cast’s rooftop rehearsal here:

We’re not really sure how Corden could top himself next time, but we think that an elaborate production of Stephen Sondheim’s Sweeney Todd on California State Route 138 would qualify as must-see TV.