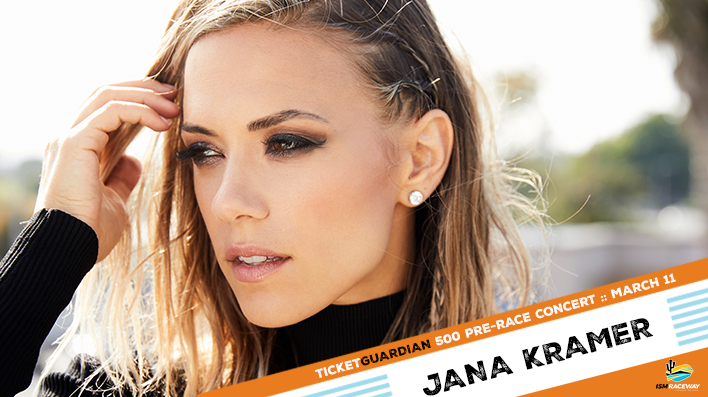 Hosted at the ISM Raceway in Phoenix, Arizona, the TicketGuardian 500 Monster Energy NASCAR Cup Series is part of a three-day Spring Race Weekend. While racing fans are excited to see their favorite drivers, and rightfully so, ISM Raceway and Niner Sports & Entertainment are putting on a pre-race concert for all of the attendees, featuring country singer and actress Jana Kramer.

Jana Kramer began her career as an actress with minor roles on “Friday Night Lights” and “90210” before her hit role as Alex Dupre on the popular CW show, “One Tree Hill.” On the show, Jana was able to incorporate music into Alex’s character arc before launching her country music career in 2012. Since then, she has had several top-10 Billboard hits and a certified platinum single, “I Got the Boy.” She was also a finalist on Season 23 of Dancing with the Stars. The hit country singer released her newest single, “I’ve Done Love,” last summer.

This isn’t Jana’s first performance at a NASCAR race. “It’s always really fun,” she said. “NASCAR fans are really energetic, and they like to have a good time. We definitely make sure to bring that to the crowd to pump them up.”

Racing Fans! ? I’m so excited to perform at the #TicketGaurdian500 pre-race in Phoenix! Come on out to @ISMRaceway for a great time Sunday, March 11th. ? pic.twitter.com/gksYyyYFKq

The concert will take place on Sunday, March 11 prior to the TicketGuardian 500 race. The concert is included free for all attendees with a grandstand ticket. Tickets are on sale now.