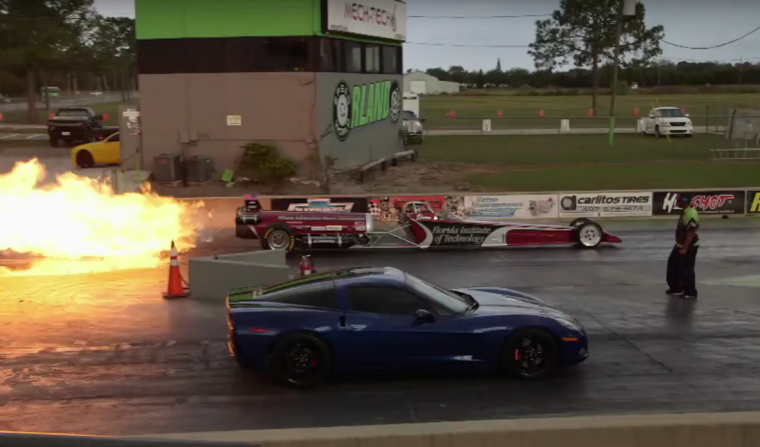 In a recent episode of Jay Leno’s Garage, the comedian and car enthusiast spotlighted Chris and Elaine Larsen, the husband-and-wife team behind Larsen Motorsports in Orlando, Florida.

Chris is the builder, while his wife Elaine is the reigning two-time Jet Dragster World Champion. Leno talks to both of them about their racing history, as well as Elaine’s newest dragster, which is being designed, engineered and fabricated by students from the Florida Institute of Technology.

It’s interesting to hear about the Elaine’s racing and personal history, which includes the unlikely backstory of being raised a Mennonite (which reminds Jay Leno that he owns a Ford Model T built especially for Mennonites, because of course he does). But the real fun comes when Elaine challenges Jay to a race: her in the student-designed Jet Dragster, and him in a 2005 Chevy Corvette C6.

The C6 Corvette’s 6.0-liter V8 engine yields 400 horsepower—pretty good for a production car, but not quite as good as the 5,000 pounds of thrust provided by Elaine’s student-built dragster.

Though he is given a generous seven-second head start, the Corvette is no match for Elaine’s Jet Dragster. In fact, Jay might has well have been driving his Mennonite Model T.

“I think Corvette’s got some work to do,” Jay deadpans after the decisive loss.

Of course, while the Corvette doesn’t have anywhere near the speed of the Jet Dragster, it does win the day when it comes to fuel consumption. The 2005 Corvette manages 24 miles per gallon on the highway, while the Dragster uses up 23 gallons of fuel for each 8 mile pass—which works out to a less than environmentally-friendly 0.01 mpg.

So between the poor fuel efficiency and the lake of brakes, maybe the Jet Dragster isn’t that much of an improvement over the Vette.