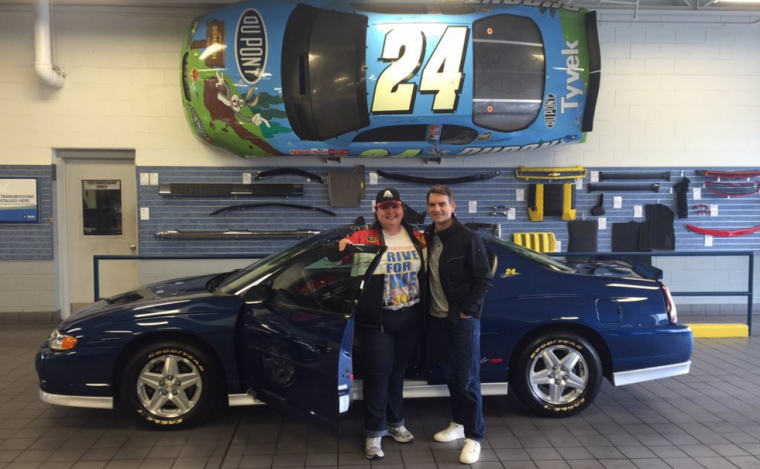 Jeff Gordon has been getting a lot of well-deserved tributes in his final NASCAR season, and the retiring racer has been returning the love back to his fans, with the kind of class and generosity that has made him such a great representative for the sport.

When Gordon met one of his biggest fans, Loraine, at a race in Sonoma, California, she told him that she had hoped to have him autograph her 2003 Jeff Gordon Chevrolet Monte Carlo SS, but she lost it in a fire before they could meet.

In response, Gordon brought Loraine to Charlotte, North Carolina, where he gave her his very own ’03 Monte Carlo SS.

Here’s a video of Loraine receiving the surprise car from Gordon, which manages to be very heartwarming, despite the fact that whoever filmed it held their phone vertically rather than horizontally (videos should be shot in LANDSCAPE, not PORTRAIT, people!)

In addition to being previously-owned (and now autographed) by Jeff Gordon, Loraine’s new ride also has the advantage of having just 124 miles on it.

“And listen, don’t let this one burn down,” Gordon says in the video, which is the kind of insightful car advice you can get from a professional driver.

“Pretty awesome day,” Gordon later wrote about the experience on Facebook. “Thanks to Loraine & everyone who has shown their support over the years for being such amazing fans.”

Gordon, 43, will be retiring from NASCAR after the end of this season, ending a 24-year career.