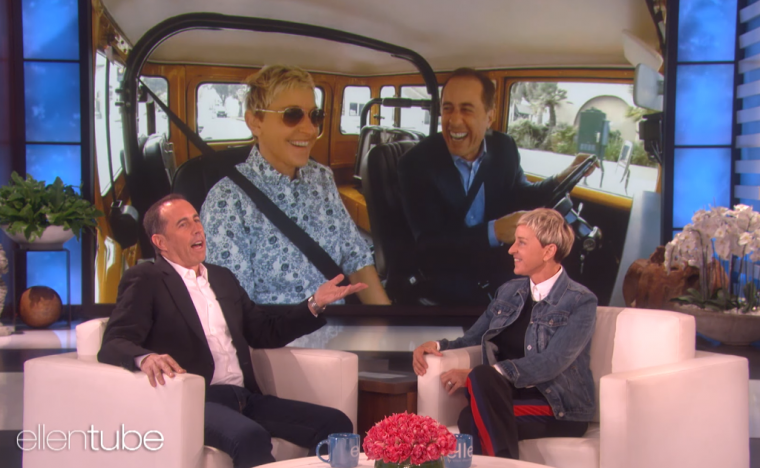 It feels like forever since Jerry Seinfeld announced that his popular series, “Comedians in Cars Getting Coffee,” was making its move to Netflix. While the series has officially been launched on the streaming platform, we have yet to see the highly anticipated tenth season’s arrival. But the series is, in fact, on its way. Jerry Seinfeld made an appearance on The Ellen DeGeneres Show yesterday, debuting a clip from an upcoming episode with the daytime host.

It doesn’t have to be Halloween for Ellen to pull pranks. Ellen pranks her guests year-round, and she took that prankster attitude to Seinfeld’s show. After hopping inside the Toyota FJ 40, a vehicle chosen specifically by Seinfeld for the episode, Jerry realized he had lost the keys. As it turns out, Ellen found the keys inside the car and, to make a point about how Jerry shouldn’t leave keys inside a vehicle unattended, she hid them under the passenger’s seat. However, she gave them up rather quickly when the show’s crew became involved in the search. Although, from the undeniable grin on Ellen’s face the entire time they were searching, Jerry’s comedian instinct probably should’ve picked up on her antics.

Jerry Seinfeld explained that he chose the Toyota FJ 40 because he felt like it fit Ellen’s personality. “It’s kind of a Jeep, but it’s a Toyota from the early ’70s,” he said. “It’s just real and relatable and it reminded me of [Ellen].”

Unfortunately, we don’t have an official premiere date for the new season. During his interview, Seinfeld explained that the show isn’t finished yet, but they said it is set to premiere later this year.

Watch the full interview and episode preview below: