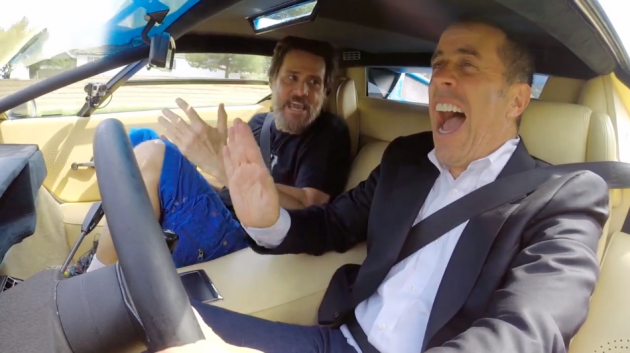 Jim Carrey and Jerry Seinfeld inside a vintage Lambo

It’s 2015, and we still haven’t gotten our 40 Classic Films Starring Jim Carrey retrospective, which seems like kind of a rip off.

Still, Jerry Seinfeld is apparently a connoisseur of Mr. Carrey’s oeuvre, and showed his appreciation by inviting him to appear on his web series Comedians in Cars Getting Coffee—here’s our sneak peek:

The video, which is sponsored by Acura, begins with a delightful vintage ad for Honda motorcycles.

Then, Seinfeld picks Carrey up in a gorgeous Tahiti Blue 1976 Lamborghini Countach LP400, which is equipped with a 370 horsepower V12 engine that powers the vintage Lambo to a top speed of 180 mph (and back in the days when Jimmy Carter was president, that was a lot).

Carrey tells Seinfeld that he once owned a McLaren, but it was too fast for him (“You’re like, ‘what am I eating?’ and it’s your testicles”). Carrey says he now drives a Tesla, which prompts Jerry to voice his displeasure with electric cars, saying, “I like burning stuff.”

There are some great non-car-related moments in this video, too, including the revelations that Carrey brings his own coffee sweetener with him wherever he goes, is really into painting, and once succeeded in weirding out Nicolas Cage (no mean feat!)