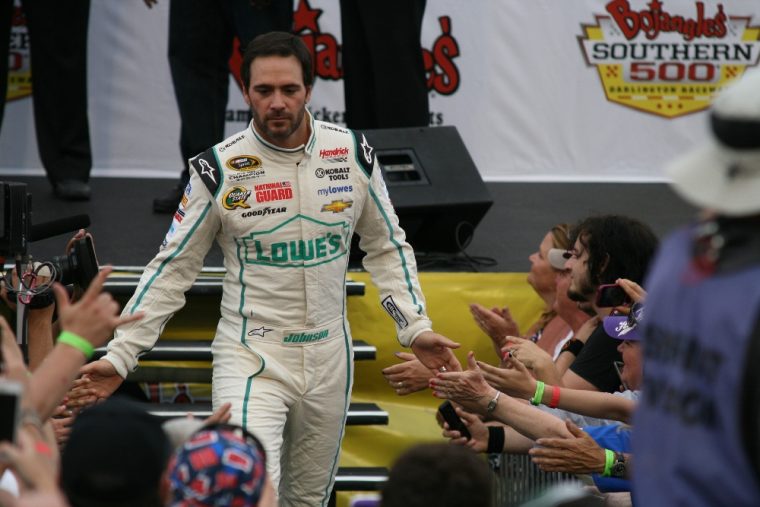 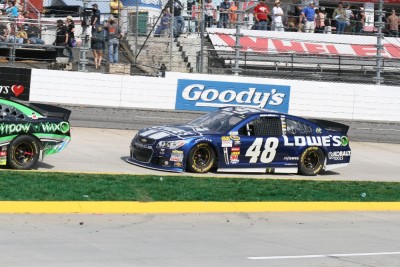 Johnson won all 76 races in his No. 48 Chevrolet
Photo: © Parker Anderson

Johnson made his debut in NASCAR’s premier series in 2001, just months after the unfortunate accident that took the life of Earnhardt Sr. at Daytona International Speedway. In the 16 years since Johnson’s debut, he leads all drivers with six NASCAR Sprint Cup titles and 76 race wins, which is one less championship than “The Intimidator,” but exactly the same number of individual races won.

“This is special for sure,” Johnson told ESPN after winning last week’s race that tied him with Earnhardt. “There was a big void in my mind not having a chance to race against him. I was literally a handful of months away from having the opportunity. To tie him today, for me personally, gives me a little bit of attachment to the great Dale Earnhardt.”

Johnson’s teammate and fellow Team Chevy driver, Dale Earnhardt Jr., said he thinks his late father would have enjoyed competing against Johnson. In fact, Johnson had the chance to meet Earnhardt Sr. one time when he visited his truck shop with fellow driver Ron Hornaday. Upon meeting Earnhardt Sr., Johnson was given a pocket knife from the legendary driver, but was then told he needed to return a penny in exchange, or he would give Earnhardt Sr. many years of bad luck. Johnson, who didn’t have any money on him, searched the parking lot and surrounding sidewalks until he could find a penny, which earned him a pat on the back from the racing legend for his efforts.

Johnson will attempt to break his tie with Earnhardt Sr. this weekend when NASCAR visits Las Vegas Motor Speedway. The race is scheduled to begin at 3:30 pm on Sunday, March 6th. The race will be broadcast by Fox.