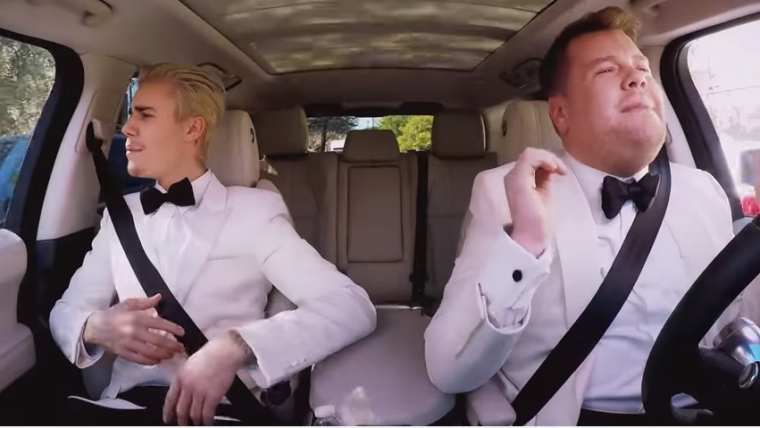 It’s no secret that we love Carpool Karaoke on The Late Late Show with James Corden here at The News Wheel. Thanks to two big high profile events on CBS, the Super Bowl and the Grammy Awards, we’ve been treated to more episodes of the fun segment than ever. Last night, James Corden’s post-Grammys episode got an extra boost from 2016 Grammy Award Winner and fangirl favorite Justin Bieber as Corden raced all over LA to get to the award show and back to the studio where the late night program is recorded. This is the third time that Bieber has hitched a ride in Corden’s interview room on wheels.

A clip of Bieber and Corden on the way to the award show was actually aired during CBS’s Red Carpet coverage. The two gentlemen were running late, and Corden was irritated that Bieber had decided to dress in a white tux that matched the one Corden picked out. The late night host had the pop star put lotion on his face to prepare him for the event’s cameras, since you should never apply your own beauty products while driving.*

To keep with the spirit of Carpool Karaoke, Corden and Bieber busted out singing Bruno Mars’s “Uptown Funk” (that went on to win Record of the Year at the awards show that night) while driving in the car. James Corden seems to be more committed to knowing the popular song’s lyrics, but Bieber joined in for an impressive bit of seated choreography.

After the Grammys, the stars got into the car again to head to Corden’s studio to shoot Monday night’s episode. On this leg of the trip, the duo compared goodie bags with each other (Justin Bieber seemed to have the real swag bag, with a vacation and iPad inside, while Corden was stuck with things like a map of LA, scented candle, and lip balm). Finally, James decided they were running so late that they needed to start the show in his car and the segment ended with a singalong to The Late Late Show‘s theme song.

Tonight, viewers can tune in to an extended Carpool Karaoke segment featuring singer Sia. Personally, I’m looking forward to June, when Corden will host the Tony Awards on CBS. Hopefully that will mean a sing-along  featuring a Broadway star. You have to admit that a Carpool Karaoke episode featuring Lin-Manuel Miranda would be pretty amazing (hint, hint).

Give the people what they want!
Image: CBS/60 Minutes

Get outta my dreams…and into your car (pool karaoke please)
https://t.co/8AICBLxpCJ

*For the record, you probably shouldn’t have Justin Bieber’s hand in your face while driving either.