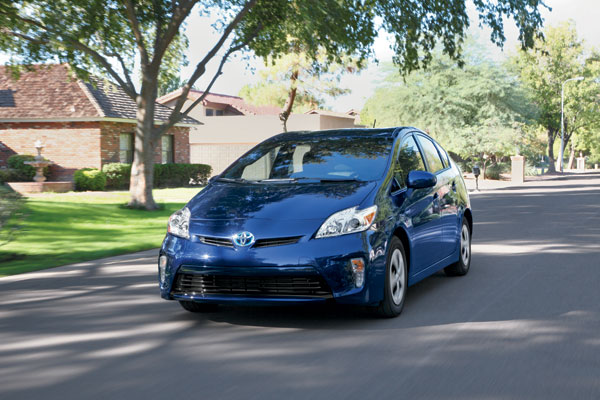 When you think of the greenest car brands, chances are you think of Toyota. With the success of the Prius hybrid lineup, plus additional green vehicles like the Camry Hybrid, Avalon Hybrid, and FCV Concept (soon to be reality), it’s not surprising that many people’s minds go straight to Toyota. It’s no wonder, then, that the Japanese automaker placed near the top of Interbrand’s Best Global Green Brands list for 2014, ranking in an impressive second place.

Toyota has been drastically reducing energy usage over the last few years. Between 2011 and 2012, Toyota dropped its per-vehicle water consumption from 3.4 to 3.2 cubic meters, while in 2011 Toyota Motor Manufacturing France (TMMF) reduced its water purchases by 37 percent by introducing a rainwater recovery basin. Going a step further, in 2012 TMMF achieved zero purchased water for manufacturing after extending its rainwater storage.

Also in 2012, Toyota managed to reduce its CO2 emissions by 5,000 tons, resulting in a cumulative reduction from hybrid vehicles of 34.10 million tons. Additionally, Toyota Japan has been busy recycling its end-of-life hybrid batteries as stationary storage batteries that it’s then providing to Toyota dealerships.

Finally, Toyota has been working on developing its Fuel Cell Vehicle (FCV). First shown at the CES Las Vegas back in January, it’s no secret that Toyota is in the process of making the transition from FCV Concept to FCV production vehicle. Scheduled for public release in 2015, the FCV is expected to refuel in just three minutes, and offer a range of 500 kilometers, or around 311 miles.

Toyota has achieved a lot in its mission to become one of the greenest brands on the planet, and we look forward to seeing the automaker continue to make strides in the coming years.