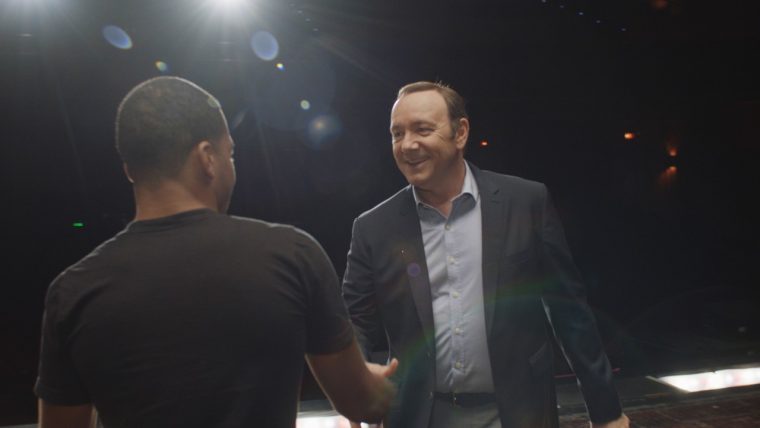 Chevy is running its #DayItForward campaign today, using the extra 24 hours allotted by this Leap Year to commit random acts of kindness/marketing. The whole thing is ostensibly inspired by the film Pay It Forward—a movie that no one particularly likes, but that everyone has had to watch at least once in junior high school.

And this particular #DayItForward stunt wears its influences on its sleeve, as it actually features Pay It Forward star Kevin Spacey, who surprises an aspiring actor. Take a look:

Kevin Spacey does what he does best in this video: speak directly to the camera in lengthy monologues, do impressions of other actors (specifically, Jack Lemmon), and show a lot of forehead. He also recalls being inspired early in his career by some positive feedback he got from Lemmon, and says he wants to pass on that encouragement to a young performer.

That performer happens to be Diontae Simpson, who is preparing to deliver a speech from Moby Dick. You might think Spacey would watch the scene and then tell Diontae he did a great job—you know, like Jack Lemmon did for him—but instead he cuts him off before he can do any actual acting, perhaps worrying that Diontae will recite too lengthy a passage from Herman Melville’s epic novel (should’ve just read all of Bartleby’s dialogue from Bartleby, the Scrivner, Diontae). And since we never get to see the scene, we’ll just have to trust that this guy is actually talented, even though Chevrolet is notoriously bad at recognizing actors.

But what Spacey and Chevy give to Diontae is ultimately more tangible than praise: a grant that will support him as he continues to pursue his dreams. He is also given a partnership with the Kevin Spacey Foundation, which will provide him with mentoring and assistance as he applies to drama schools.

Who knows? Maybe Diontae Simpson will end up following in Spacey’s footsteps by eventually winning an Oscar… and then making a lot of bad movies, until becoming typecast as a sarcastic character actor, before finally redeeming himself by starring in a prestige television drama.